Or, I should say “nearly” completed as they still need the guiderail boards added along the bottom sides (attached to the tops of the floor risers and holding the bottom row of bundles in place laterally in the real load). But I’m currently out of 2×6 strip. 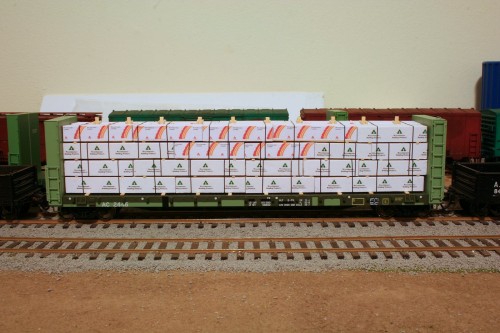 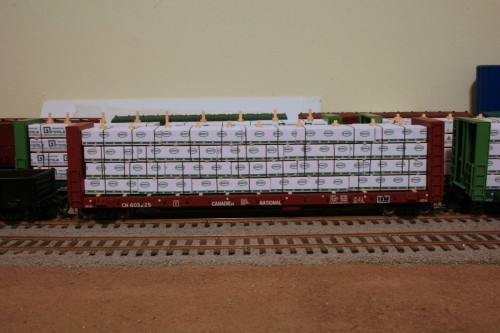 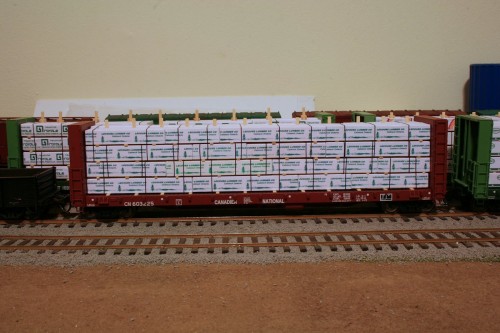 I was forwarded some photos and material to try to do this neat Weyerhaeuser wrap from the mid 1980s, with a red-orange section of bark and tree rings. Sadly I can’t currently find any good photos on-line in a place I can actually link to for this post, but I did get a couple of good ones to work from. It’s a pretty attractive scheme:

These two simpler Weyerhauser wraps from the 1970s-80s period were also done and added to the archive a little while back, but not highlighted in any blog post:

I already have one load in progress using the latter 1980s wrap.

They also join this modern (currently in use) Weyerhauser wrap that’s also been in the archive for a while, making a nice selection of period Weyerhaeuser graphics:

In addition to the additional Weyerhauser material, here’s a few more new ones:

I’ve also added a bit of detail to the modern Dubreuil Forest Products graphic and re-posted that one:

As always, dates preceded with a “~” are approximated based off a small set of photographic sightings and may be applicable for a wider range than stated.