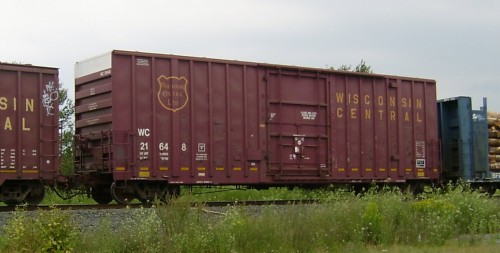 Photographed at Sault Ste. Marie in August 2004, WC 21648 is a typical example of the modern high-capacity 50′ boxcar design built for paper service. This particular car is part of series WC 21550-21649 built by Greenbrier’s Trenton Works in 1997.

The second car coupled to the left of 21648 is WC 26010, an older ex-SOO Line car also commonly still in paper service at the time. Both of these types of cars would have been the typical sight at the St. Marys Paper mill during the 1990s and 2000s. 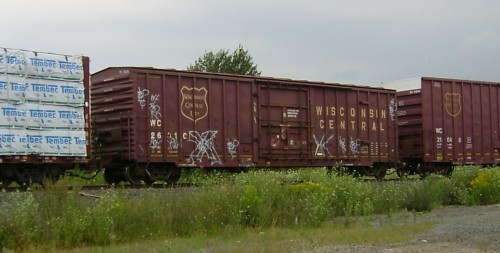 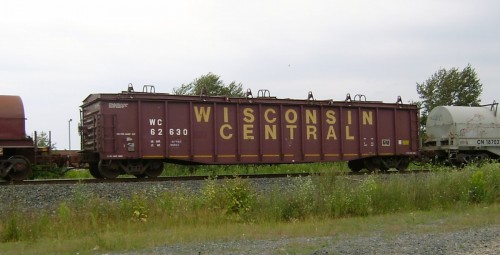 A bit older than the modern CN and CP cars recently pictured, although still a little outside my personal targeted mid-1980s modelling era, is this Wisconsin Central gondola for coil steel service.

Originally built for the SOO Line and acquired during WC’s startup in 1986, this car has unusually deep sides and covers to protect the coil steel load.

Similar WC covered gondolas would have been a common sight in Sault Ste. Marie during the 1990s.

Photo taken by myself in Sault Ste. Marie in August 2004.

This posting is a bit of an add-on to last week’s Freight Car Friday.

Mixed in with the leased GATX hoppers featured last week were a number of Wisconsin Central hoppers and even a pair of ex-Ontario Northland AC 8600 series hoppers. This post highlights the various WC series seen. Multiple examples of each series depicted below were seen and photographed, but only one representative will be shown here.

This first car was quite obviously a former Burlington Northern car, built by Bethlehem Steel. From series WC 33000-33199.

This next car represents a series of cars built by Pullman-Standard for Kansas City Power & Light (KCLX). The SSAM reporting marks it now bears are for WC subsidiary Sault Ste. Marie Bridge Co. Series SSAM 33250-33374. At least one of this series was also seen and photographed in my summer 2013 visit.

This pair of cars represents a group of what appears to have been about a 50 car series of WC flatcars that were leased from PROCOR in 1994.

These cars were originally built in 1974 by Marine Industries as part of a group of 160 cars for PROCOR in the number series UNPX 173020-173179. These cars are just over 69′ in internal length between the bulkheads.

In 2005 these cars were transferred back to PROCOR and renumbered with UNPX reporting marks again, but keeping their 38000 series numbers.

Both photos at Steelton yard in 2000. 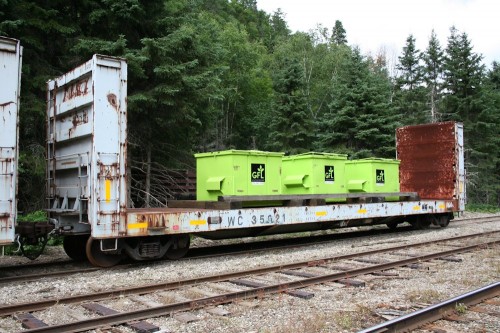