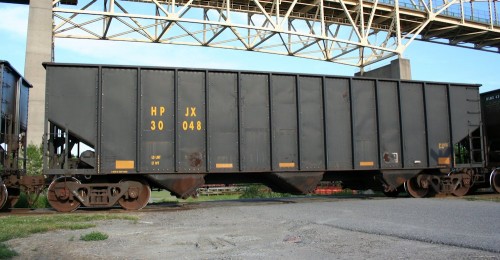 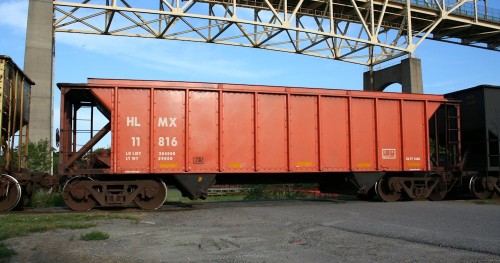 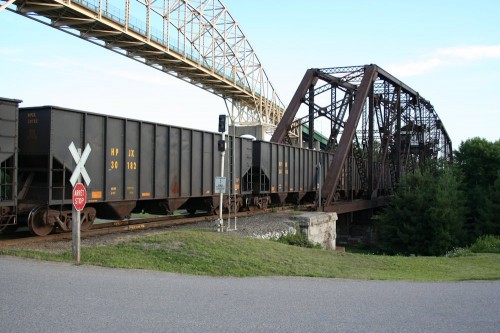 This posting is a bit of an add-on to last week’s Freight Car Friday.

Mixed in with the leased GATX hoppers featured last week were a number of Wisconsin Central hoppers and even a pair of ex-Ontario Northland AC 8600 series hoppers. This post highlights the various WC series seen. Multiple examples of each series depicted below were seen and photographed, but only one representative will be shown here.

This first car was quite obviously a former Burlington Northern car, built by Bethlehem Steel. From series WC 33000-33199.

This next car represents a series of cars built by Pullman-Standard for Kansas City Power & Light (KCLX). The SSAM reporting marks it now bears are for WC subsidiary Sault Ste. Marie Bridge Co. Series SSAM 33250-33374. At least one of this series was also seen and photographed in my summer 2013 visit.

In the mid to late 1990s Algoma Steel had been acquiring a larger percentage of their iron ore raw materials as pellets from the Tilden iron ore mine in upper Michigan. At the time this was mainly handled by the LS&I from the mine to ore docks and carried to Sault Ste. Marie by ship.

In 1996, Wisconsin Central managed to an all-rail movement of ore from Tilden mine directly to Algoma Steel at Sault Ste. Marie during the winter season. These shipments of pelletized iron ore averaged 40-45 cars daily during the season in 100 ton hopper cars.

When Algoma Ore Properties in Wawa shut down in 1998, WC tried convince the other parties involved to make the all-rail movements year round rather than just winter only, and in the winter of 2000-2001 this became a reality, and this daily movement is still occurring today.

When I visited Sault Ste. Marie in August 2004, the primary cars being used in this service were a mix of WC cars and cars leased from GATX, with GCCX and GIEX reporting marks, and even a couple of AC hoppers were in the mix.

In this post are a few of the variations of GATX leased hoppers that were seen in this service in 2004.

When the Algoma Ore Properties mines and sinter plant in the Wawa area shut down in 1998, Wisconsin Central took all of the original AC 8001-8100 series bathtub hoppers and rebuilt them with side extensions and new bottom outlets for ballast service. These cars have sophisticated pneumatically operated door mechanisms that can be operated by remote control (note the lettering identifying each outlet gate A-D and the equipment box and small solar panel on the right hand side of the car).

The cars are renumbered in sequence by adding “20” in front of the original AC number, so this was originally AC 8036.

Once Canadian National purchased the Wisconsin Central in October 2001, these cars really started to spread out across the system and I found this example in Jasper, Alberta on a family vacation in August 2004.