In the late 1890s industrialist Francis Clergue was building his business empire in Sault Ste. Marie when in 1898 a prospector brought a lump of ore to the attention of Clergue’s company and the rest, as they say, is history – albeit one with its share of bumps and bruises along the way and not necessarily a happy ending.

In response to the ore discovery, in 1899 Clergue chartered the Algoma Central Railway and built a twelve mile line from a harbour at Michipicoten to the newly established Helen mine, a few miles northeast of what is today Wawa. Another mine (Josephine) was established a couple years later several miles further east. The harbour at Michipicoten featured a large 275′ wooden ore dock with a 600 ton capacity and a long curving approach trestle, as well as a 600′ commercial pier with a large warehouse and passenger station. Steel ore cars built in 1899-1901 were acquired new from the Pressed Steel Car Co. in Pennsylvania. 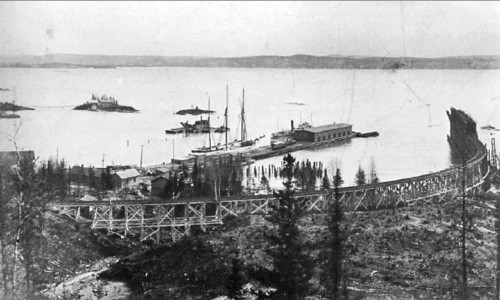 Within a few years however, cracks began to appear in the ACR’s parent company, the Lake Superior Corporation, and in 1903 Clergue’s empire suffered a spectacular financial crash. Most iron mining activities came to a stop and Helen mine was abandoned. Not much happened on the Algoma Central for the next several years, with the railway and other various companies in the Lake Superior Corporation family entering a slow period until about 1909.

In 1909-1910, fortunes took a turn for the better. Construction was restarted on the main line from where it had been abandoned in 1903 some 70 miles north of the Sault, and by 1914 had been completed to Hearst. The line to Josephine mine was rebuilt and extended towards what would become Hawk Junction, and a new 9 mile long spur was built in 1910 from a point between Wawa and Josephine to access the new Magpie mine. The ore at Magpie was lower grade than what was mined at Helen, and extensive ore processing facilities were constructed at the mine to upgrade the ore. While Josephine mine seems to have never truly amounted to much, Magpie mine was a strong source of traffic for several years and additional steel ore cars were purchased secondhand from the Duluth & Iron Range Railway in 1916. Also in 1910, an pyrite mine was established by Madoc Mining near Goudreau, north of Hawk Junction with product shipped to the harbour at Michipicoten – mainly in wooden ore hoppers assigned to this service.

Ultimately however, Magpie shut down in 1921 bringing an end to iron mining in the Wawa region once again, and in about 1925 the pyrites operation at Goudreau also shut down. Through the rest of the 1920s the railway would be sustained by pulpwood revenues.

In 1929 the remains of the abandoned ore dock were removed and replaced by a large coal dock with a travelling unloading bridge structure to unload coal from bulk freighters. The majority of the coal brought in to the port would be loaded in CN cars to be shipped to various northern Ontario terminals for locomotive fuel. This traffic would keep the port quite busy and in 1943 the dock was significantly expanded.

Dieselization during the 1950s was the death knell for coal being handled via this port, and the traffic declined throughout this decade, eventually ending some time in the 1960s at which point the coal handling equipment was removed. A small Imperial Oil tank farm was built at the habour in the early 1950s to bring in diesel fuel via tanker vessel which maintained some fuel traffic, but a few tank cars was a far cry from train loads (literally) of coal.

The Return of Iron Mining

In the late 1930s, Algoma Steel began an aggressive expansion and bold moves were made to redevelop the mines in the Wawa area. In 1939, nearly 20 years since that last ore had previously been mined in the area, the mine at Helen was redeveloped and a new ore processing plant was constructed at Wawa. Raw ore was shipped from the mine(s) to the sinter plant, and the processed ore was shipped either by rail to Sault Ste. Marie or to Michipicoten harbour where a large new unloading trestle and loading equipment were built to load ore into lake freighters. Large numbers of steel hoppers were acquired secondhand from various roads in the United States, the railway’s old fleet of 1900-built ore cars being long gone, and would have been massively obsolete anyway by then.

Then in that same year Hitler’s Germany invaded Poland, and suddenly a resource hauling railway serving a steel mill became a rather hot property indeed. (It’s entirely possible that the politically savvy head of the Algoma Steel Company, Sir James Dunn, may have anticipated the conflict in attempting to redevelop the Wawa mining industry from 1937-39.) The boost that the wartime revenues gave the railway carried through after the end of the conflict with the railway continuing strong through the 1950s and 1960s. In the early 1960s the principal amount on the construction bonds to build the railway was finally paid off and the company paid a dividend to shareholders for the first time in its entire history.

During the early 1940s an attempt was made to redevelop the old Josephine mine as well, with work begun in 1941 on draining a lake and sinking new underground mine shafts. Ore began shipping out of the mine in 1945, unfortunately soon after a collapse of large section of the mine brought a final, permanent end to the works at Josephine. Other mines were developed though, such as the open pit Sir James mine, reached via the three and a half mile Siderite spur and operating through the 1950s.

During the 1950s facilities at the Helen mine were significantly upgraded, with a new underground mine shaft being developed at the site (The George A. MacLeod mine). A bucket tramline had been built in the 1940s or early 1950s to carry raw ore from the mine to Wawa and this was replaced later with a high capacity conveyor system that brought the ore directly from the underground MacLeod mine to the sinter plant. The unloading trestle at Michipicoten harbour was also upgraded in the 1950s to a conveyor system from a dumping pit for the railcars.

An indication of the importance of the facilities at Michipicoten during the 1950s is that the railway built new diesel locomotive servicing facilites at Brient (the yard for the harbour, just under a mile up the hill), although by the 1970s ore was shipped to Algoma Steel entirely by rail year-round, and the ore handling facilities, as well as the coal dock, the old commercial dock (as pulpwood shipments also switched to an all-rail basis in the late 1950s) and the Brient yard were all abandoned. (The old ore trestle doesn’t seem to have been actually demolished until the late 1980s.) 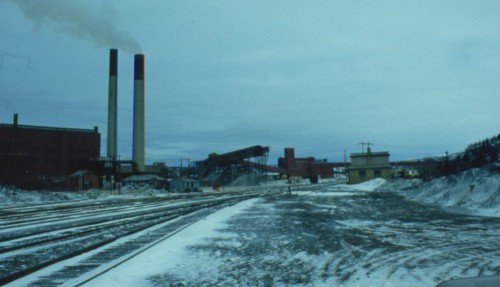 March 1981 view of Wawa yard. The main sintering facilities are to the left. The structures in the centre of the photo are part of the conveyor system that delivers ore from the mine to the plant, and the buff coloured building at right is the ACR station. Photographer unknown, slide in my collection.

In the early 1970s however, some new traffic began using the former coal dock at Michipicoten: limestone, deposited by self-unloading vessels, would be shipped to Wawa for blending with the sinter. Coke and even some additional grades of iron ore for blending with the Wawa ore were also handled via Michipicoten harbour through the 1980s and 1990s.

During the late 1990s however, Algoma Steel began switching over to using higher grades of iron ore mined in the Michigan Upper Penninsula, and in 1998 the mine and sinter plant at Wawa closed down, bringing a final? end to iron ore mining in the area, at least for now. With the sole source of traffic on the branch eliminated, the railway filed for abandonment of the line, and in 2000 the tracks from Hawk Junction to Michipicoten were removed.