In 1971 the ACR received what was to be their first order of modern, “second generation” diesel locomotives. In a marked departure from the smaller four axle 1500 and 1750 HP GP7 and GP9 units that comprised the motive power fleet at the time, the ACR ordered a trio of 3000 HP, six-axle SD40 locomotives from General Motors Diesel Division. This order was followed up two years later with six SD40-2 units in 1973. 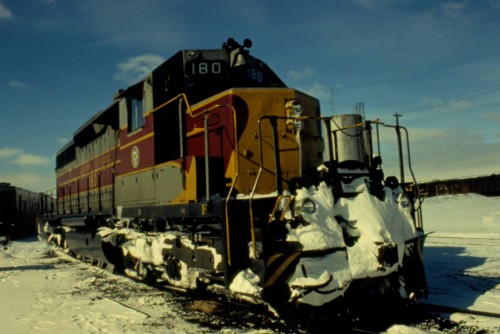 The large size and weight of these modern units, combined with the long rigid wheelbase of the three-axle trucks underneath raised some concerns about increased track wear and maintenance as a result of their use – similar concerns had largely restricted the use of the ACR’s largest steam locomotives, a pair of rather heavy 2-10-2 (most of the ACR’s freight engines were of a 2-8-2 wheel arrangement). However, unlike the steamers, which were just a little too big for the railway, the SD40 and SD40-2 units were massively successful in hauling heavy ore trains between Wawa and Steelton yard, so these concerns were muted or just chalked up to the cost of doing business.

This is not to say that the big units didn’t have certain restrictions placed on them. The employee’s timetables list numerous special speed restrictions when the SD40 type units are used in a diesel consist, mainly in areas with sharp curvatures. In many places these restrictions are 5 to 10 MPH lower than the standard freight speed limits for those zones, and speeds in passing sidings was restricted to a maximum of 12 MPH (where the normal legal maximum for Restricted or Slow speed was 15 MPH).

Additionally, while no prohibition exists in the timetable, most sources tend to suggest that the use of the larger units was discouraged north of Hawk Junction – particularly north of Oba where the mainline was mostly 80-85lb rail, much of it original from 1912, so train nos. 5 and 6 would typically be run with smaller 4-axle power, with the big SD40s earning their keep hauling tonnage between Steelton and Hawk Junction, and on the Michipicoten branch ore trains.

Interestingly, today CN runs freights on the line up into Hearst with even larger typical modern power like SD70 type locomotives, although I’m not sure if the rails have been materially upgraded. Probably just significantly speed restricted.