Over the next several weeks, I’m beginning a series of posts looking at some of the operations of the former Algoma Central railway, with each post focusing on some particular commodity and/or facet of the operation. Generally speaking, the posts will roughly cover historical and current operational information from about the 1970s to today.

As this series progresses, if anyone reading has further information that expands, illumines, adds to, corrects my information, or even flat out contradicts an assumption I’ve made, please do comment on the post or send me an email! I’d love to be able to flesh out any gaps or errors in my knowledge.

As a preliminary overview, one should understand the geography of the area, and how the ACR fits in to the other railways in the region. This map shows the railways in Northern Ontario in the mid 1980s. 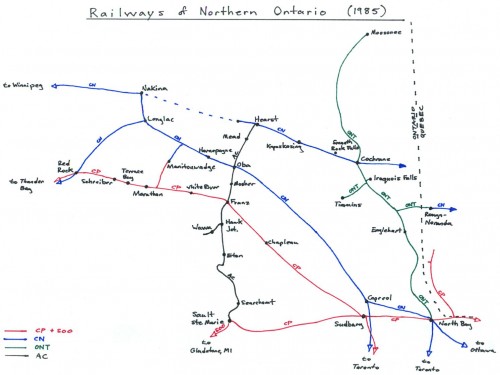 The Algoma Central is the black line running vertically in the centre of the map. Important interchanges for traffic exchanged with other railways are located at Franz (Canadian Pacific), Oba (Canadian National), Hearst (CN and by extension Ontario Northland) and Sault Ste. Marie (SOO and CP). All of these points are extremely important for traffic coming onto or off of the ACR.

A quick rundown of changes that have been made to the map between 1985 and today:

All posts from this series: