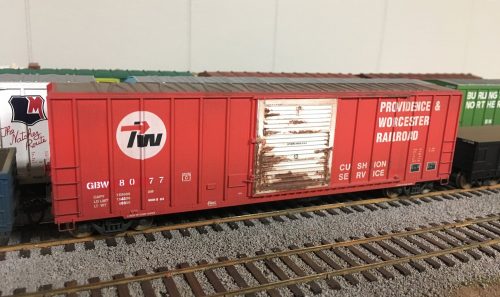 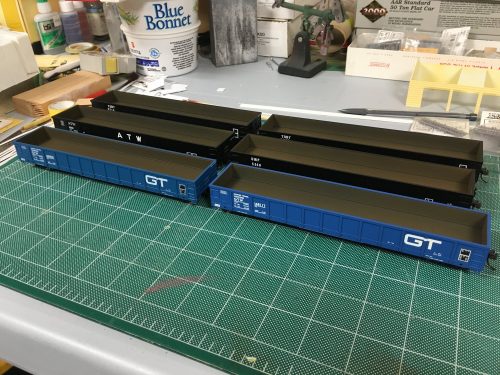 BR 50222 is an interesting woodpulp service boxcar with a storied history. The car was originally built for the Southern Railroad (SOU) by Pullman-Standard. The “waffle” pattern of the car sides accomodated load tie-down attachment points on the inside of the car. Southern acquired a large number of these “waffle-side” boxcars from Pullman-Standard, and this design would become a real signature car on that railway. Only a few other identical examples were built for some of the “Family Lines” railways which later became part of CSX.

This particular car was sold by Southern to Helm Leasing (HLMX) and was reconditioned for woodpulp service with end reinforcement and carbody vents in the corners and then saw service on BC Rail as BCOL 850222. When BC Rail let the lease expire, they were renumbered BR and dropped the leading 8 from the car number. Currently these BR cars are commonly seen in woodpulp service for Canadian Pacific.

GROX 50008 is an example of the pulpwood flatcars commonly seen around log sidings on the former ACR currently. Most of the cars I saw were either these GROX cars or cars with VRSX reporting marks, which were even more commonly. Unfortunately I wasn’t able to get photos of any of the VRSX cars from the train.

This empty flatcar was caught at Hawk Junction on July 19, 2017

An innovation in the 1970s was the design and development of the centre-divided bulkhead flatcar for the shipping of lumber. Designed with a central truss structure that both strengthened the car and supported the load without the need for additional stabilization in the load and equipped with built in ratchets and tie down cables to eliminate a lot of strapping and with or without deck risers for the first row of packaged lumber bundles. This made it much easier to load packaged and bundled lumber as bundles no longer needed to be staggered in order to create a solid and secure load and a lot of waste generated in the form of strapping and blocking material is prevented.

NOKL 732348 was photographed on July 16, 2015 at Hearst (Wyborn siding) with a load of lumber from Lecours Lumber in Calstock, Ontario. Leased flatcars with the reporting marks of shortline Northwestern Oklahoma Railroad (actually a mark used by cars leased to various railways by First Union) are among the most commonly seen in this service, and these blue painted cars in the series NOKL 732300-732349 and 733050-733099 (built by National Steel Car in 2000 and 1998 respectively) are specifically leased to Ontario Northland. Brown painted NOKL 734500-734599 – built by NSC in 2004 – also seems to be a series exclusively seen in ONR service in addition to Ontario Northland’s own ONT 4100-4149 series, built by NSC in 1997.

Additionally, CN provides some cars for loading in the area, in various family reporting marks (CN, IC, WC, BCOL, etc.) and a few other NOKL groups.