I hadn’t initially thought to necessarily write up a full post, but a photo on facebook drew a pretty good response, so I thought I’d share some details here.

I’m sure a common malady amongst model railroaders is the accumulation of many in-progress projects all taking up space on the work table(s) at the same time. Like most, I have many kit projects on the go, and of course a lot of scratchbuilds and other custom projects, plus I recently acquired a 3D printer (which I’m sure will be prominently featured in many project to feature on this blog in the future). Of course these scratch projects don’t come with their own box(es), and many times extensively reworked custom/kitbash jobs don’t necessarily go back into original packaging either.

Keeping things (especially trucks, screws, and other small parts for projects) properly organized and separated (from other projects) and together (from not being lost from the project they belong to) becomes kind of important when you have more than one or two projects in the same work space. And just throwing parts and pieces in random surplus Athearn/Intermountain/Accurail kit boxes just wasn’t cutting it any more.

So I got some sheets of foam core presentation board from the local arts and crafts store (also available at most office & school supply stores as well) and worked up some standardized “project boxes” – larger than small kit boxes so that larger or multi-car projects can be organized together, and standard dimensions so the boxes can be stacked and organized to clean up my work space.

Properly laid out, two standard sheets of 20″x30″ foam core board can be cut into five 10×12″ boxes with a 2 1/2″ depth. The cutting diagram is laid out below: (Note the “long” sides are ~11 1/2″ not the full 12″ of the box bottom since they will fit in between the 10″ box ends.) The leftover strips can be saved to make low dividers in some boxes to separate small parts for some projects, etc.

Assembly of each box is super straight-forward, gluing the sides and ends to the bottom of the box to make a simple rectangular box with open top as seen in the lead photo. I assembled my boxes with a hot-glue gun (a “mini” version was purchased for $5 at the arts and crafts store). You could also use regular glue, but the drying time is very slow, and while the glue is wet the sides fall over if you sneeze at them, and if there’s any warping of the boards it’s difficult to hold them together properly. The hot glue sets very quickly and strongly.

For the finishing touch(es), you can use the leftover material after cutting out the box pieces per the cutting diagrams above to add internal dividers inside any of the boxes in any fashion that makes sense to organize bits and pieces of your projects (or some boxes could be general “parts boxes” instead of a specific project e.g. misc freight car details, doors & windows, etc.

Finally, from the remaining scrap material cut small squares of material to glue to the bottom of the boxes about ~1/4″ inset from the edges. These will act as “locking pins” into the open top of the box below and allow many boxes to stack without any movement, so you won’t fear the stack of boxes sliding and collapsing, spilling your projects over the worktable and/or floor.

And that’s it; just a very simple and inexpensive way of creating some organizers for your work space and various projects in-flight.

I got a little tired of digging around in my box of packages of styrene strip to try and find the specific size I need for whatever project I’m working on, so I broke out the foam core board and whipped up a little something. 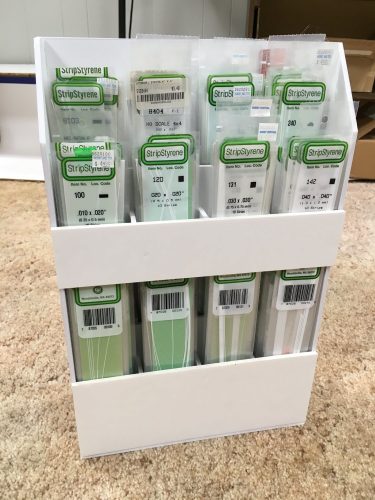 Fine precision isn’t necessarily key to this project but the overall size is 11.5” wide, 18” tall overall and 4” deep. The rear set of pockets has a 2” deep false floor to stagger them higher than the front row so the labels are visible. All of the pieces are glued together with regular PVA white glue. Other that that, what you see is pretty much what you get.

Now my styrene supply is much more organized and easy to access. A must have for any serious hobbyist’s workshop. I’ve been meaning to do this for a while, and should have done a while ago…

Just a small project this weekend to make a proper storage and sorting box for my waybills. All cut out of a single sheet of 20×30” foam core board. 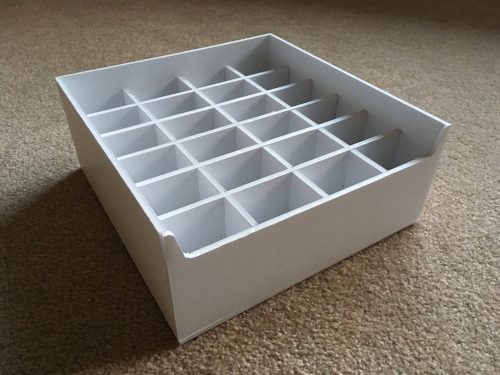 The box is made from 3/16″ foam core board and has overall dimensions of (roughly) 10×10″ (precisely, it’s 9 15/16″ wide by 10 5/16″ deep to account for the internal size of the pockets plus the width of all the material) with 24 (4×6) sorting/storage slots that are 2 1/4″ wide x 1 1/2″ deep to fit the waybill cards. The depth of the outer walls is 4″, the depth of the inner pocket dividers are 3″. I cut a drop in the front of the box down to match the 3″ depth of the pockets to made it easier to see and access the front row(s) of waybills. The central dividers are notched halfway up where they cross each other to form a simple but sturdy interlocking series of halved joints (like this: https://en.wikipedia.org/wiki/Halved_joint ) I didn’t glue the dividers to each other due to the nice tight fit of the halved joints, but glued the whole divider assembly, the outer walls and base together with regular white glue. 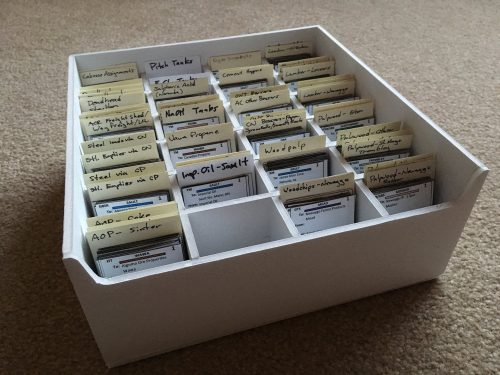 The labelled card dividers within each pocket are just pieces of card stock (actually just the trimmings of the car card sheet after the car cards are cut out) cut slightly longer than the waybills so they stick up above them.