So this evening I got a little bored and looking through and organizing some of my reference photos and ended up studying some of the photos from the Oba Lake area and specifically of the long wooden trestles that cut directly across several bays of the lake.

I also have several images of a 1951 AC&HB drawing for a standard timber trestle from the Sault Public Library Archives, and I started looking at this in detail and comparing it to the Oba Lake photos, figuring out the construction and trying to estimate the height of the structure. Looking at the timbers in the abutment at the end of one bridge, the height from the top of the bottom sill (which rests on pilings right around the waterline) seemed to be roughly 7-8 feet. Subtracting the thicknesses of the ties, heavy stringers, and the bent cap and sill, I estimated an approximate height of about 4′ for the height of the vertical members in the trestle bent and started sketching, and before long I had drawn an exact scale section drawing of a representative bent, based on this height.

So I thought I’d throw this up here. Since I don’t have a layout space, it’ll be a long time before I could ever actually model a representation of this, but maybe someone else finds this useful, even if you just enjoy the details of trestle construction. Since the height is estimated, this may not be exact, but seems to work out fairly well. 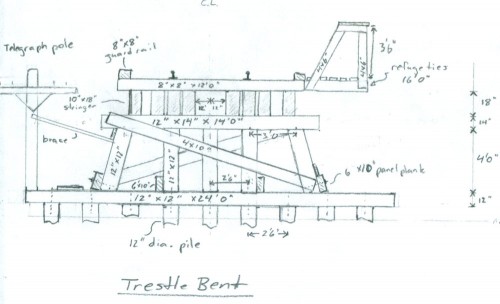 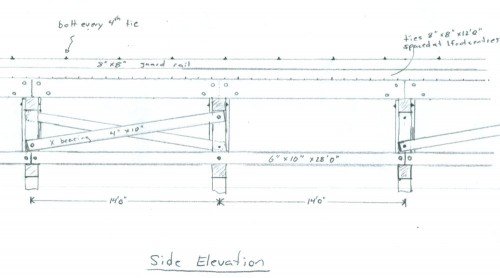 All timber sizes, lengths and spacing are taken directly from the standard drawing except for the vertical member and the bottom sill (lengths estimated) and the diagonal braces of course adjust to fit.

I drew the side elevation with cross bracing every other span similar to the standard drawing, but due to the low height of the trestles over Oba Lake, they don’t appear to actually have any, so these should be left out. Unfortunately side photos of these bridges are almost impossible to find thanks to the remoteness of the location, but close inspection of the next photo below shows that there isn’t any X-bracing on the outside of the trestle. This doesn’t necessarily rule out any additional hidden internal bracing between the bents though.

The water level was high when I rode the Tour of the Line to Hearst and took these photos at the Oba Lake trestles, so the lower sills of the bents are just barely even poking out of the water. I’ve come across and saved some other photos from online with lower water levels though, where the sills are at least a foot above the waterline and you can see that they rest on the tops of the actual pilings driven into the lake bottom. Also, the longest bridge was replaced sometime in the late 1990s or early 2000s and the pilings for the original bridge can still be seen off to the side, although with the high water level on my trip they were below the surface of the water – you could see them from the rear of the train but they don’t show in my photos. 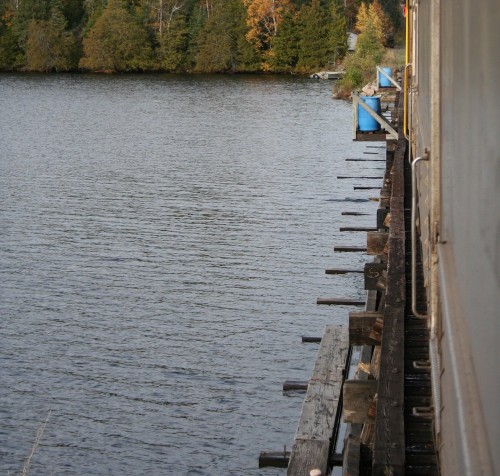 If you look carefully at the above photo, taken of the southernmost bridge at mile 211.9, one can pick out most of the features including the extended length of the sills almost under water, the heavy bent caps, the ends of the angles sway braces bolted to the cap and the horizontal plank just above the sills stabilizing the structure.

At the north end of the replaced bridge at mile 212.7, one of the original timber sills for the old trestle still remains and is visible right at the waterline, and you can see the notches in it where the vertical 12″x12″ posts once sat. 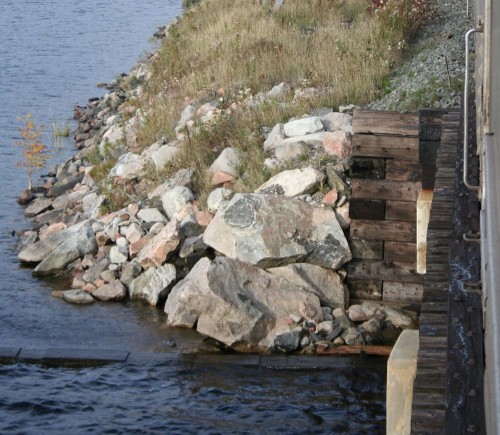 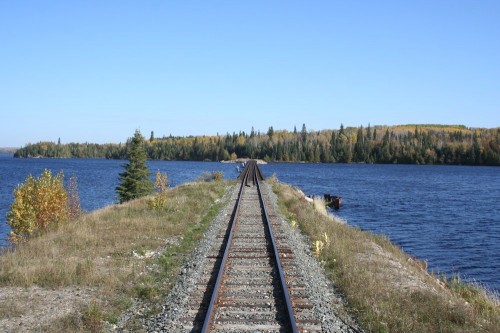 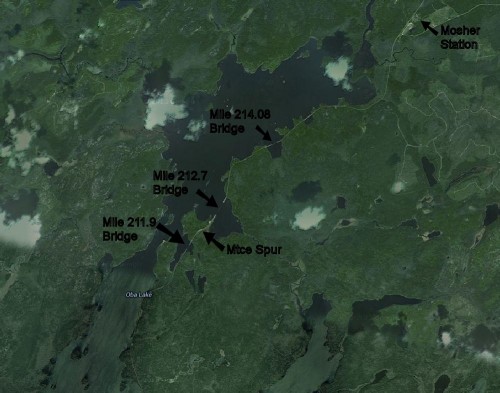 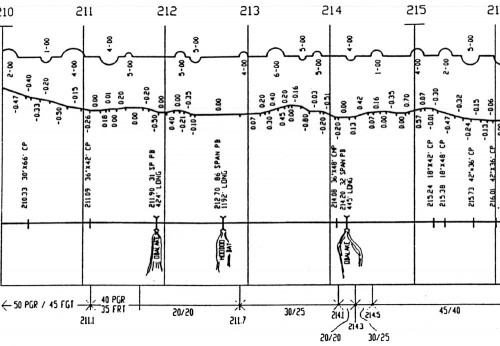 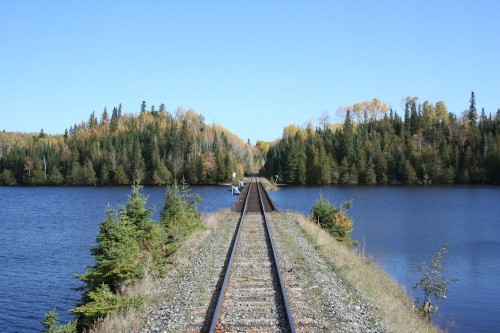 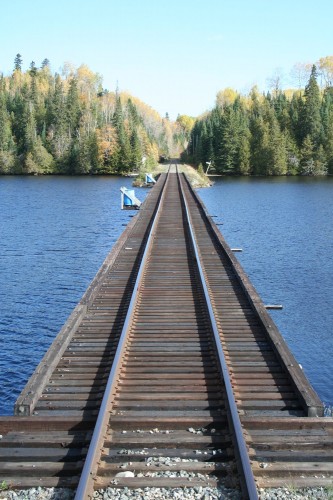 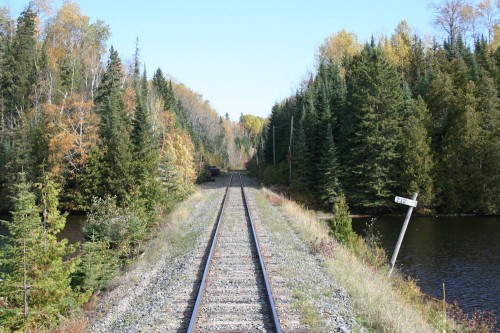 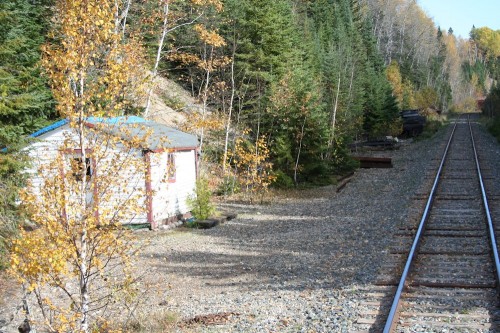 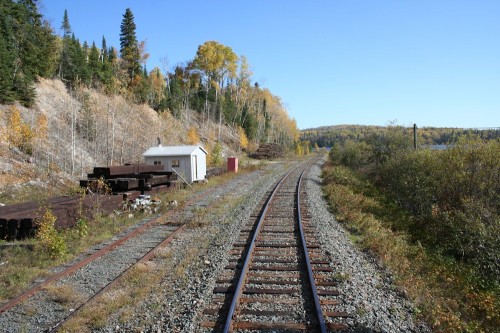 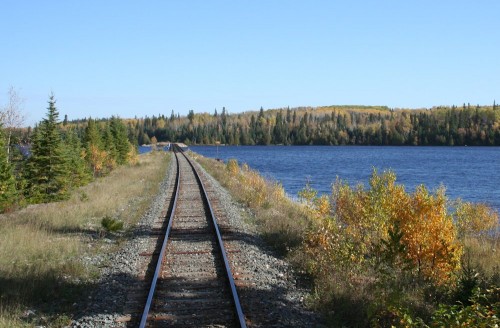 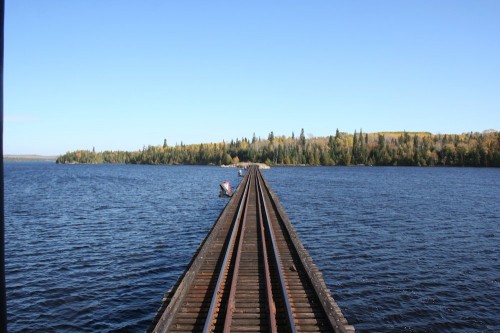 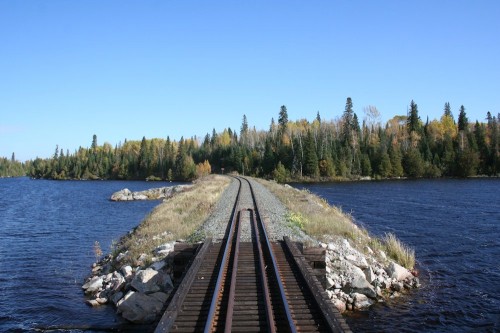 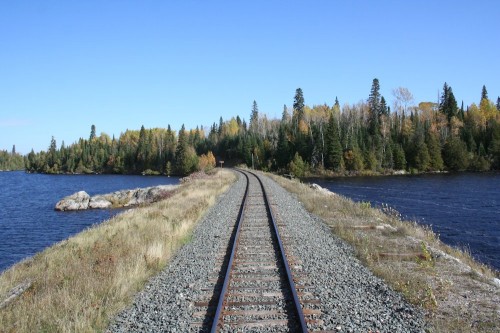 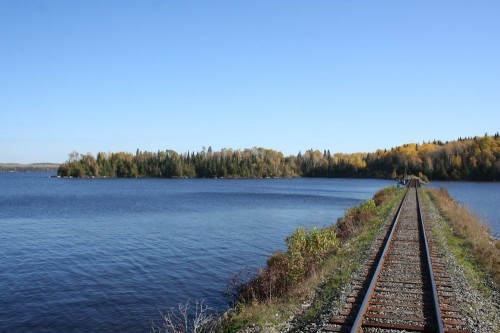 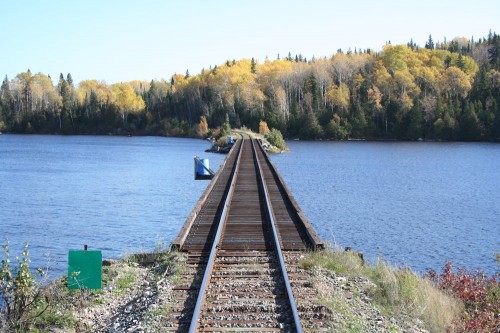 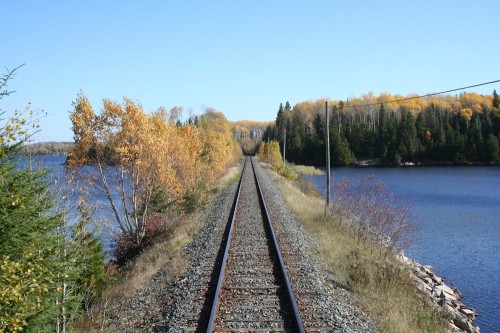