Just in advance of the long weekend, I was tipped off about a special move on the Goderich-Exeter Railway here in Southern Ontario of an extra-large dimensional load on a specialized “Schnabel” car. The load is some sort of industrial boiler(?) that was constructed at Babcock & Wilcox in Cambridge, ON and was being moved to the port of Hamilton, ON to be loaded onto a ship for the next stage of its journey to its final destination.

Fortunately I happened to be visiting the area for the long weekend and was able to spend the day Sunday following its move from Guelph to Georgetown for interchange to CN. The move was actually a full 2-day affair, with Goderich-Exeter lifting the loaded car in Cambridge and bringing it to Guelph on Saturday, and the move from Guelph to Hamilton – with Goderich-Exeter handling it to Georgetown, and CN handling it Georgetown to Hamilton – completed on Sunday. 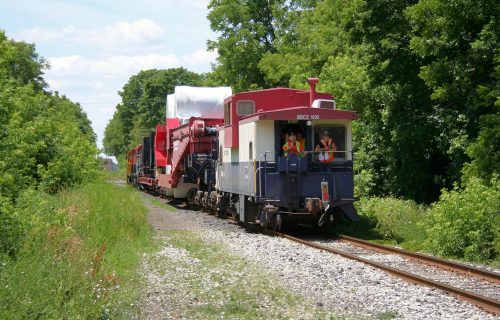 The train with the load gets underway in Guelph.

The entire move from Cambridge to Georgetown on the Goderich-Exeter was done with the engines shoving and the caboose leading. This was done so the train so that on arrival at Georgetown the GEXR engines could be replaced by CN power and be facing the correct direction for the move from Georgetown to Hamilton. 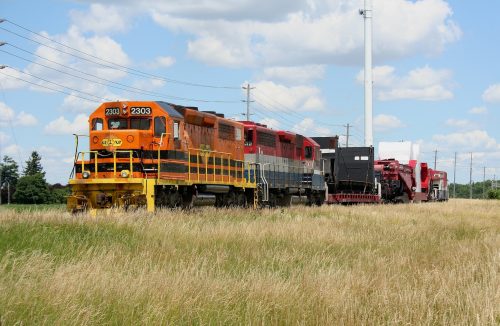 Pushing through the countryside just outside of Guelph. The load and its special heavy-duty car dwarfs the rest of the equipment on the train. 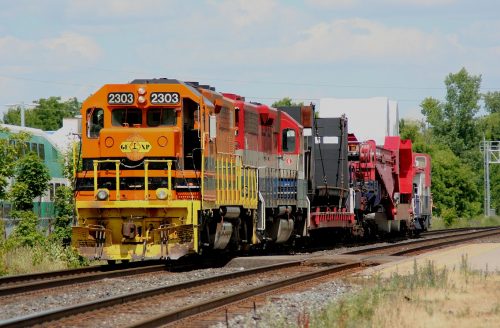 The special move parked on the north track in front of Georgetown station.

On arrival at Georgetown, the train would sit and wait for a bit for three other trains to pass by, including the regular GEXR freight returning from CN’s Toronto MacMillan yard. The the GEXR power would be removed and head back onto Goderich-Exeter rails, and the CN power waiting west of the junction would back on to take over for the run to Hamilton. 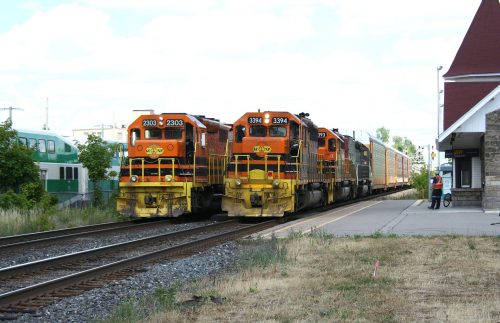 Sadly a cloud dampened what could have been a spectacular shot of side-by-side Goderich-Exeter trains on CN, with regular CN MacMillan Yard to Stratford train GEXR 431 slowly passing the stopped dimensional extra. 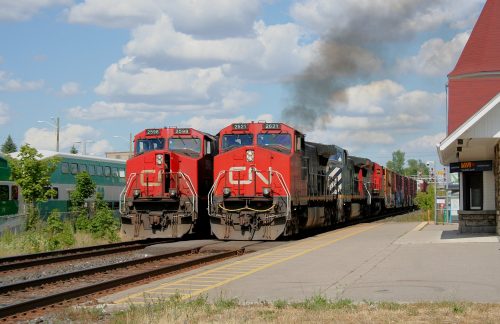 Side by side CNs at Georgetown. The dimensional extra at left, now with the GEXR power replaced by CN 2598, is passed slowly by manifest freight M399 rolling by with a 10 MPH restriction passing the dimensional load.

5 thoughts on “Railfanning a Big Move”