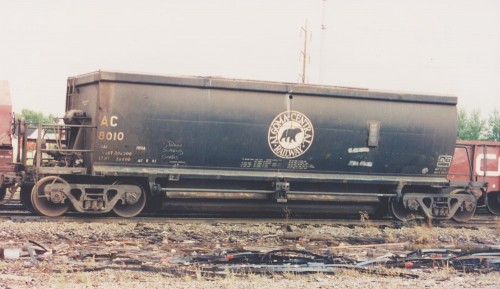 Photographed in October 1993 by Blair Smith, AC 8010 is an example of a series of 100 cars built by National Steel Car in 1971 for the Algoma Central. Aside from the totally unique bathtub shape of the car body, the cars feature a chain-driven longitudinal hopper opening; this feature was apparently not well appreciated by crews when it froze up in the winter. Another 100 cars were apparently planned, but cancelled, with the railway instead ordering 300 rapid-discharge triple hoppers for delivery in 1974-75.