After (and, well, let’s face it, during) my day trip on the Agawa Canyon Tour Train, and in between visits to the Sault Ste. Marie Public Library, I tried to also take the opportunity to do a little railfanning around town. I also visited last July and September, and caught a few things then too, so while I certainly don’t have full information of everything that goes on, I’ve been reasonably successful for an outsider, and I’m starting to learn what’s going on and put together at least a broad picture of things. 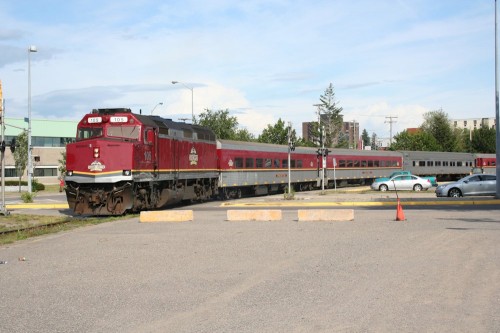 Obviously the most well-known rail operating in Sault Ste. Marie is the Agawa Canyon Tour Train. Departing daily at 8 AM during the summer and fall seasons from the Algoma Central Railway’s downtown station beside the Station Mall, the train runs north to Canyon and returns to the downtown station typically around 5:30 PM (although the schedule on the ACR web site says 6). If one is wanting to photograph the train at the station, the best sun angles will be in the afternoon due to the roughly north-west angle of the tracks at this location. 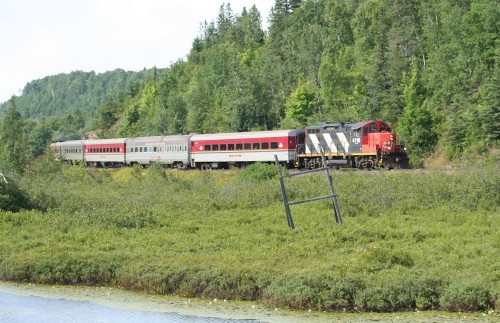 About half an hour before train arrives back in the Sault, it will be passing through this curve just north of mile 10 on the railway. (Restricted speed through the yard limits in Sault Ste. Marie to the station means this final part of the trip through town takes a little time.) North of town the highway, river and rail line all parallel for a short stretch; this shot is taken from the shoulder of highway 17. This is another shot where the sun angles favour the afternoon southbound train as the highway is to the west side of the railway and river. A northbound morning shot could work here if it is an overcast day. 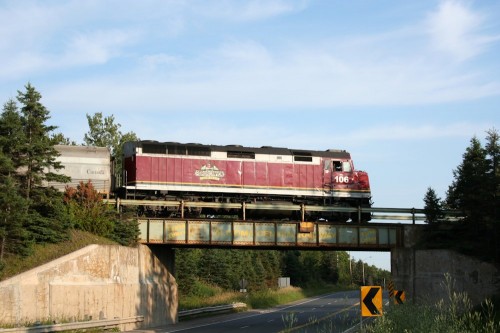 Unfortunately I just missed the southbound regular passenger train from Hearst as it came in later; I was just returning to this spot and it arrived about the same time I did, so I chased it a bit closer to town and had to content with this shot at the highway 17 underpass at the north edge of town.

The regular train operates north from Sault Ste. Marie on Mondays, Thursdays and Saturdays, departing at 9:20 AM during the current summer season from a track at the entrance to Steelton yard, in behind the shops facilities, rather than the downtown passenger station. The southbound train returns from Hearst the following day(s) – that being Tuesdays, Fridays and Sundays – and is scheduled to return to Sault Ste. Marie at 6:10 PM, but will often be running a little late. So it should be around the mile 10 curve pretty much any time after 6. (I just missed it at about 7:30.) Note that Wednesday is the off day, where the train will not be running, and the equipment remain parked at Steelton yard. 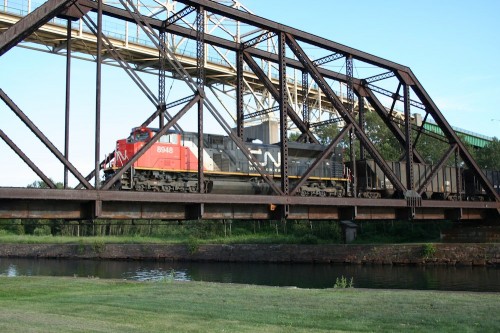 I missed catching the daily freight train from the US this time around, but it typically operates into the Canadian Sault in the early evening, around 7 PM or so, shortly before the southbound regular passenger train. I did manage to catch it last summer, so I can share a photo or two of that. 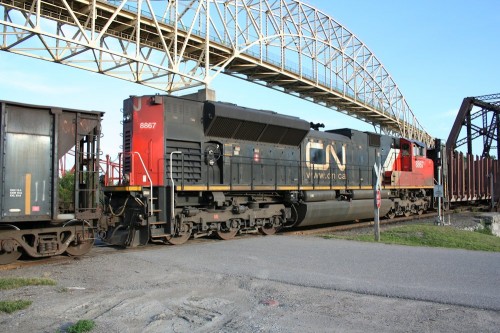 Interestingly, this train typically runs with distributed power, with one engine at the front of the train and a second splice somewhere in the middle. The train handles iron ore for Algoma Steel from a mine in uppser Michigan and all manner of interchange traffic from Sault Ste. Marie, primarily southbound steel and pulpwood loads.

The northbound train runs directly into the former ACR yards in Sault Ste. Marie, ON, and will perform some switching to break down the inbound train, fish out the distributed power unit and assemble the southbound train to the States. Once the outbound is prepared, it will head south again; often this will be near or well after dark, depending on the season.

(The two daylight shots of the northbound freight crossing the swing bridge and the old Canadian ship canal were taken in July 2013. The night shot is a time exposure of the southbound freight departing Canada taken in September 2013.)

Freight service on the line north of Sault Ste. Marie I’m a little less clear on, but the northbound freight seems to generally hit Hawk Junction around lunchtime, so would be out of Sault Ste. Marie very early in the morning, possibly just before dawn. When I rode the Tour of the Line back on the last day of September, our regular train met the southbound freight at Northland siding, with the tour train ahead of us meeting the freight at Wabos. However, when I recently rode the Agawa Canyon Tour Train, we encountered no other trains on the trip north.

I’m not entirely certain whether the freights do indeed operate daily (sources indicate yes, and I’m pretty much 3/3 for encountering the northbound freight at or near Hawk Junction) or whether it may be adjusted based on the traffic levels, and that single observation at Northland is not really enough data to say whether that timing is typical, or quite late (for what it’s worth, when I chased the tour train to Searchmont in July 2013, I never saw nor heard any sign of freight activity then either; the passenger train seemed to be having a completely unrestricted run north, just like my ride two weeks ago). Or whether the operating times simply vary wildly for some reason like crew availability at Hearst and/or Hawk Junction. 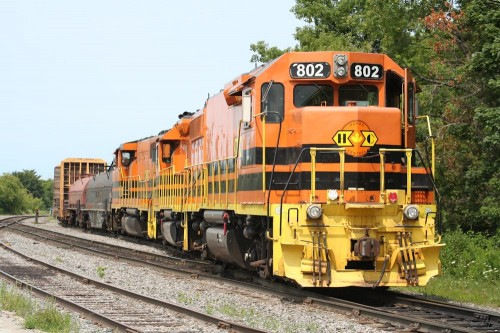 Huron Central action appears to be typically (and reliably – I’ve shot them all three times I’ve visited the Sault over the past year) caught around mid-afternoon at their yard in the Sault, with the mainline freight to Sudbury departing a little before supper time. Theirs is a colourful operation, and you can quite comfortable watch them switching from the old platform of the former CPR passenger station at the east end of the HCRY yard. The bright orange of the G&W family colour scheme definitely adds a lot of colour to the experience. The westbound counterpart appears to leave Sudbury in the early evening, so this would arrive in Sault Ste. Marie well after dark. 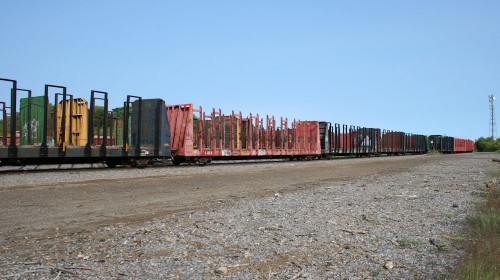 Along the south side of the Huron Central yard are a pair of tracks used for pulpwood loading. The cars loaded here are a mix of cars with Huron Central’s own reporting marks and cars with LRIX markings, that translating to the owner being “Lake Superior Eastern Rail Industries Ltd.” This appears to be a local freight car lessor, headquartered in White River, ON and their entire fleet of about 30 cars appears dedicated to service on the Huron Central. Both the LRIX and HCRY fleets consists of about 30 cars of varying designs and lineages. And since neither are really seen off of Huron Central rails, a quick peek at the pulpwood loading tracks in Sault Ste. Marie is an interesting stop for the freight car enthusiast.