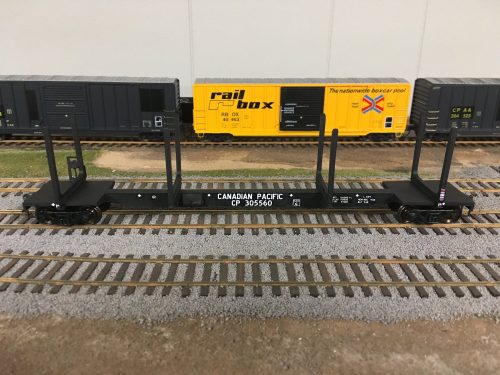 As I may have mentioned a few times on this blog, pulpwood logs are a significant traffic item on the Algoma Central, and a type of load I’ll need quite a supply of for my flatcars and gondolas. I’ve been doing some playing around and simulating with some car cards and waybills and I figure on using anywhere from 15-20 pulpwood loads during a future operating session (when I have a layout to actually operate on some day), and these loads can be moved in at least five different types of cars (52′ flatcars, 40′ flatcars, 52′ gondolas, 61′ gondolas, 48′ gondolas), so I need a lot of loads and several different types of loads.

While there are some cast resin or plastic loads that you can get to fit certain models, they won’t fit some of the customized cars I have, and I’ve never really seen one made for a standard gondola. Moreover, just nothing looks as good as a load made of real logs.

Fortunately these aren’t too complicated to make, collecting real twigs of an appropriate size and cutting them to length. (If you – or a friend – has a bandsaw, cutting a lot of them very quickly is a breeze.) Really the trickiest part is selecting good twigs that are nice and straight so you can actually get a lot of logs out of them without “wasting” most of it.

Pulp logs in northern Ontario are typically cut to ~8′ lengths. This is a perfect size for loading crosswise in bulkhead flatcars and gondolas (with usually a 9′-9’6″ inside loading width) and purpose-built flatcars (or rebuilt/modified from plain bulkhead flatcars) for pulpwood service with side stakes have the stakes evenly spaced out for logs of this size. Once the “logs” are cut, they’re just stacked up on the cars. On the prototype, gravity and the friction of the rough surfaces of the logs is usually enough to keep everything in place (although trains carrying pulpwood loads “without side stakes and chains” are often subjected to speed restrictions and ACR timetables included special footnotes in the Special Instructions section to keep a close watch for shifted or protruding logs en route so it obviously isn’t 100% perfect and an obvious reason why the side-stake cars really took over in popularity.) On the model these physics don’t quite scale the same way, and we can make it much easier to load and unload the cars by gluing the logs together into a solid load.

To make it a bit easier to work on making some of these loads, I spent a little time in the workshop this week and tossed together some sheet styrene fixtures to the exact loading dimensions of some of my common car types for pulpwood service. This lets me assemble and glue together some loads on the workbench without banging actual cars around and risking damaging their details or getting glue on them. (And white glue peels right off the styrene when dry so a bit of liberal over-use is no bad thing when building in the fixture.) 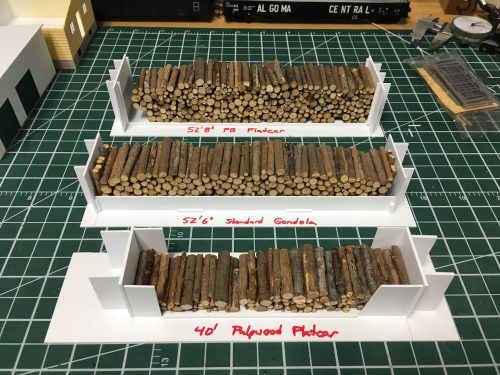 Assembly fixtures for 52’8″ bulkhead flat, 52’6″ mill gondola, 40′ pulpwood flatcar. The flatcar load at top was previously a load for a kitbashed 51′ flatcar at the club which got dropped on the floor and turned into several pieces to be re-assembled. The missing area at the one end and a few gaps at the bottom still need to be filled in here 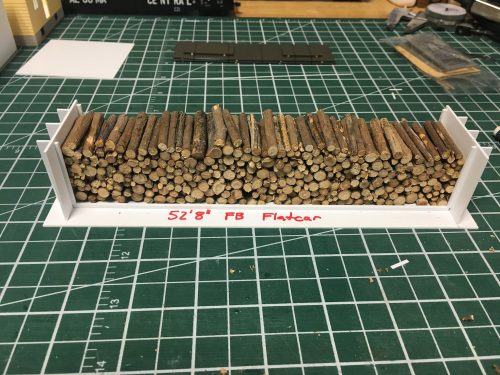 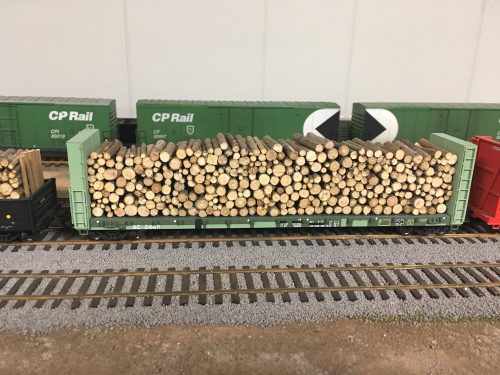 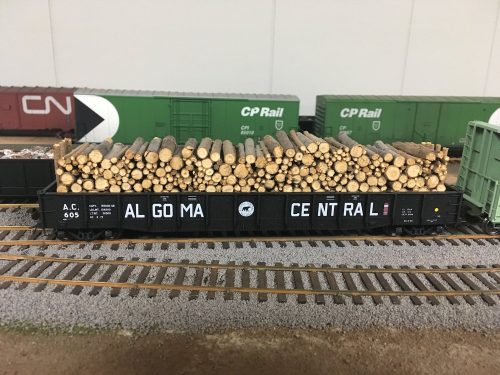 Finished load in Rapido 52’6″ gondola. Note vertical logs at ends to extend the height of the load. This was a common practice for loading pulpwood in gondolas.

Next steps: collect and cut a LOT more branches. I have three loads completed and I’m out of logs. I need at least 15-20 more to cover my eventual needs. Maybe more spread out across all the possible car types just so I have enough if the mix of loaded car types changes session to session (e.g more 52′ flatcars one session, more 61′ gondolas the next).

GROX 50008 is an example of the pulpwood flatcars commonly seen around log sidings on the former ACR currently. Most of the cars I saw were either these GROX cars or cars with VRSX reporting marks, which were even more commonly. Unfortunately I wasn’t able to get photos of any of the VRSX cars from the train.

This empty flatcar was caught at Hawk Junction on July 19, 2017