New announcements from Bowser today with good news for ACR fans, including a second run of new road numbers on their popular SD40-2 from last year, and a new model of the GMD specific versions of the SD40, including Algoma Central in the list of paint schemes.

Today I received my copy of one of the latest in Morning Sun Books’ “In Color” series: “Algoma Central In Color”. I’ve been looking forward to seeing this one since I saw it announced late last fall, and overall I have to say that I was happily not disappointed. 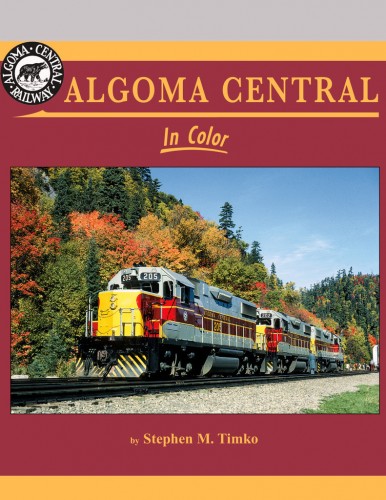 The book follows the typical format of Morning Sun’s “In Color” series, organized into chapters on specific topics but largely made up of photo selections (in 100% colour images) with explanatory captions rather than large passages of text.

This book is broken into chapters focusing on various aspects, with sections specifically covering diesel locomotives, passenger equipment (with steam generator cars getting their own feature), freight and non-revenue equipment, and a section on all three of the road’s subdivisions (with reproductions of timetable pages to put into context). While all the sections had good material, the section on the Michipicoten branch had some nice shots at the sinter plant and the harbour, and I found the freight car section to have a good selection as well.

I did notice one or two minor errors in the caption information in places (and at least one memorable spell-check/autocorrect fail referring to the “Agway Canyon Tour Train” – the software certainly wasn’t on the editor’s side that day), but overall this was nicely laid out and organized, and there were some really good photos in there.

These hard-cover books aren’t inexpensive, especially with the current Canadian dollar exchange rate, but this book is well worth an addition to your library if you’re at all remotely interested in the Algoma Central.

So early in the new year I heard of this new book on the ACR that has come out, self-published by one Byron Babbish, that I had not heard of before. This week, a copy that I ordered came in. 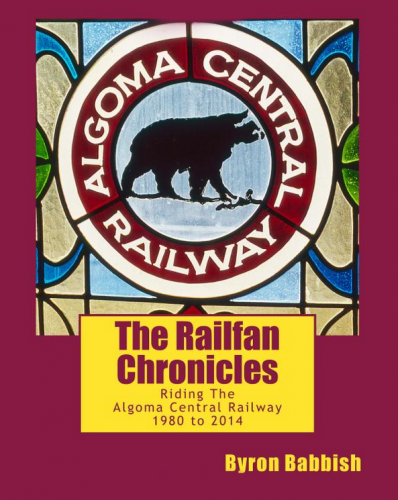 Having ordered sight unseen, and not familiar with the author’s other works, I wasn’t sure what I was going to get. Having had the chance to turn through the pages this week, the book is a nice paperback in an 8×10 page size with a little over 200 pages of mostly colour photos. As suggested by the title, rather than being written and organized as a history book, or a overview/reference book along the lines of many of the titles from Morning Sun Books for example, the book is filled with photos from 10 trips the author made on the railway over a nearly 35 year period, with chapters organized simply around each individual trip, allowing the narrative to simply capture the experience of the railway. (The second chapter contains a particularly amusing story about a high-speed journey to the Sault and barely catching the train as it was pulling out of the station after sleeping a little late in the morning.)

Many of the trips are journeys on the Agawa Canyon Tour train, with additional rides on the winter Snow Train and a few experiences on the local train, including one trip in the business car Agawa.

As all of the photos are from the perspective of a passenger, you won’t find much in the way of rosters or reference shots of specific equipment and structures (although there are some), but the book does do a nice job of showing the experience of riding the line, both to the popular Agawa Canyon park and the laid-back bush country service to camps and cottages of the local train, and the multiple visits over the years show quite nicely the gradual changes from the “classic” ACR of 1980 through the WC and CN takeovers in the 1990s and 2000s to the modern tour train of today.

You can find this book listed on Amazon or the author’s personal site.

This week Bowser posted photos on their website (and also emailed out to various contacts) of pre-production sample models of 11 different variations of their upcoming Canadian SD40-2 HO scale model.

All of the models are patterned after the versions built by General Motors Diesel Division in London, ON and represent the distinctly Canadian features that were unique to units built in Canada (vertical style ladder steps and modified handrails to match) and typical to Canadian railways (headlight in nose, cab front bell, class lights in single or 3-light groups above the number boards, single rear back-up headlight on most versions, railroad specific plow/pilot and ditch light configurations, snowshields (on certain versions) etc.).

Check out the photos of all 11 versions on Bowser’s web site here: 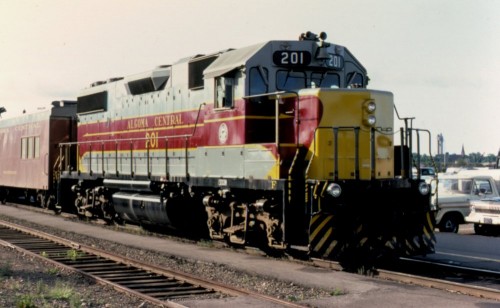 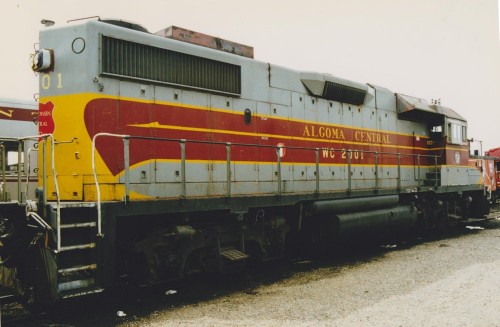