Contrasting with the south end of the railway, with heavy freight tonnage including Wawa ore and the rocky hills, steep grades, sharp curves and tall bridges that once gave the Algoma Central & Hudson Bay Railway (as it was then called) the alternate nickname “All Curves & High Bridges”, the Northern Subdivision north of Hawk Junction flattened out considerably as it moved away from Lake Superior.

Train no. 5 was the regular northbound freight on the Northern Subdivision. Departing Hawk Junction for Hearst in late morning from Mondays through Fridays this train would handle any required switching north on the way, including the CP and CN interchanges at Franz and Oba, the lumber mills at Dubreuilville or Mead and any pulpwood spurs in between. 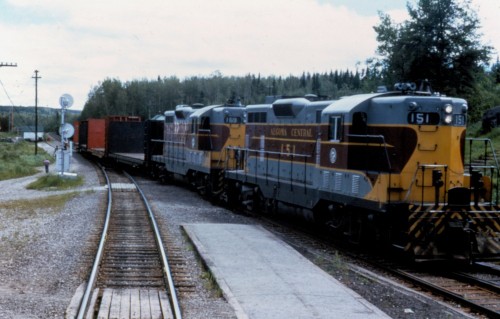 No. 5 would return to Hawk Junction the following day (i.e. Tuesdays through Saturdays) as no. 6, again performing any required switching southbound and lifting southbound traffic for Hawk Junction and Sault Ste. Marie. Freight from the arriving no. 6 would be then forwarded to Steelton yard on No. 12, departing Hawk Junction in the evenings in early 1980s timetables.

On weekends, the northbound freight from Hawk Junction would just run to Oba (as no. 15 instead of no. 5) and then return the same day as no. 16). The Oba Turn would switch interchange traffic at Franz and Oba and any required overflow switching at the pulpwood spurs at Mosher.

This train no longer appears in the timetable after the shutdown of Newaygo’s operations in 1985, but presumably would have still run extra on an as-needed basis to handle steel interchange traffic from Sault Ste. Marie to Franz and Oba.

In the late 1980s and 1990s, following the reintroduction of rail service at Dubreuilville, the ACR began running a weekday evening turn job out of Hawk Junction to Franz to switch the mill at Dubreuilville and interchange traffic at Franz.

Described in an older message from Reg Fitzpatrick, former station agent at Franz:

The arrangement was that No. 6 would lift first out traffic there [Dubreuilville] and the nightly Franz Turn would do the rest of the switching for the lumber ety spotting along with the chip etys which were normally stored at Wanda Mile 188 along with the regular storage track at Franz etys.

No. 5 in the AM would put these two ACIS cars into the ramp with one off spot. The loader equipment was large enough at the mill there to move one car out and pull the other one into the ramp without most times having to be done by the train crews.

And of course, as always, any overflow traffic could always be handled by the occasional extra.

Today of course, there are no longer any mills on the north end of the railway, however interchange at Franz, Oba and Hearst still generates a fair bit of traffic. 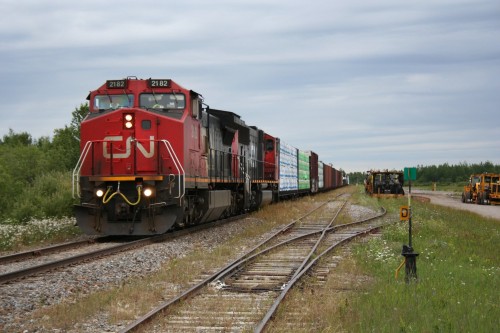 CN L572 rolls past Wyborn siding departing Hearst for Oba, Franz and Hawk Junction, with loads of lumber and paper from the Ontario Northland as well as returning pulpwood empties. July 2015.

The modern version of no. 5 & 6 are CN’s  L571 and L572. Running daily or as required between Hawk Junction and Hearst, these handle the interchange traffic at these three locations as well as switching pulpwood cars at Langdon siding, one of the few only sources of actual on-line traffic north of Hawk Junction today. L571 and L572 are basically extensions of trains L573 and L574 between Steelton yard and Hawk Junction.

2 thoughts on “Locals and turns – operations on the Northern subdivision”