The location of Mead (mile 275.3) on the Algoma Central throughout its history was basically synonymous with the Newaygo Timber Company (later Newaygo Forest Products). The location is likely named in honour of George Mead, who was involved in the early days of Newaygo’s history with some significant land acquisitions in the Fort William (now Thunder Bay) area in the late 1920s. (That’s about all I could figure out with Google, and he was likely a high ranking company executive.) From at least the early 1950s, Newaygo operated a pulpwood camp here, and in 1974 Newaygo built a sawmill here to produce lumber and woodchips which remained in operation until its closure in 1985. 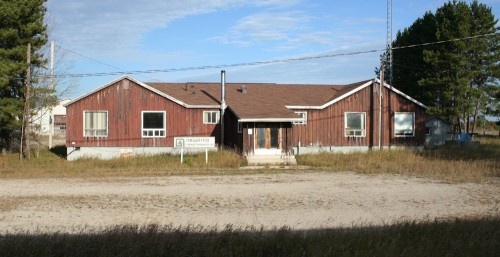 The mid 1970s seemed to be a period of equipment upgrades on the Algoma Central in general with new hopper cars and (secondhand) passenger cars acquired to replace the existing fleets, but the mill at Mead also generated the impetus for several new orders of cars as well.

To handle the new woodchip traffic out of the mill, ninety 60′ woodchip gondolas were built in August-September 1974 by National Steel Car in Hamilton, Ontario. As the woodchip cars were in basically dedicated service between Mead and a paper mill in Appleton, Wisconsin, the cars were given ACIS reporting marks restricting them to International Service. (These were the only cars to ever receive this mark.)

Also in January 1975, 25 new 52’8″ bulkhead flatcars were built by Hawker-Siddeley for the Algoma Central. The ACR’s existing flatcar fleet at the time consisted of the roughly 70 40′ cars in the 2300 series, which were fast becoming obsolete due to their small size, age and lack of solid bulkheads. They continued to get good use as pulpwood and company service cars though.

Evidently operations at Mead continued to do well through the late 1970s and in February-March of 1981, another 23 woodchip cars from NSC were delivered, this time in regular AC reporting marks. Also in 1980, another 50 bulkhead flatcars suitable for both lumber and finished steel products were acquired secondhand from British Columbia Railway.

Empty cars would often be stored at Horsey and Coppell sidings, approximately 2 miles south and 5 miles north of Mead at mileposts 273.1 and 280.9 respectively.

During the period the mill was in operation, Newaygo operated significant pulpwood spurs at several locations along the ACR, many of them having been in operation at least since the 1960s. The largest operation consisted of a camp and several loading spurs established in 1951 at Mosher (mile 217.3) and other spurs operated by Newaygo are listed in various employees timetables at Trembley (mile 22.17 on the Michipicoten branch), mile 264.5 (until 1978), and near Coppell at mile 281.9 (until 1979). The operations at Trembley and Mosher appear to wind down (or at least no longer be listed as Newaygo spurs – many of these start to be listed as “Company Spurs” in the late 1980s) at about the same time as the mill closure at Mead. 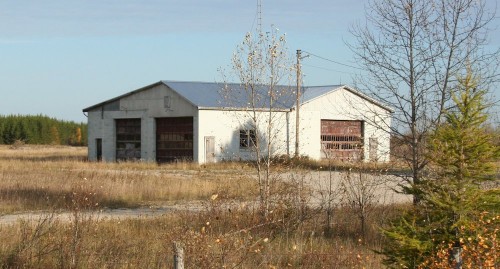 Along with the office building seen above, this maintenance garage is the only remaining structure at Mead today. October 1, 2013.

In 1985 the mill closed, and while the ACR’s fleet of flatcars could continue to find work hauling steel products and the mill at Searchmont was still in operation at this time (within two years the mill at Dubreuilville also restarted shipping via the ACR in a big way) the fleet of woodchip gondolas became surplus and were sold off, with some of the cars being sold in 1985 to Newaygo for use in other areas and routes, and others sold to Westar Timber (WESX). 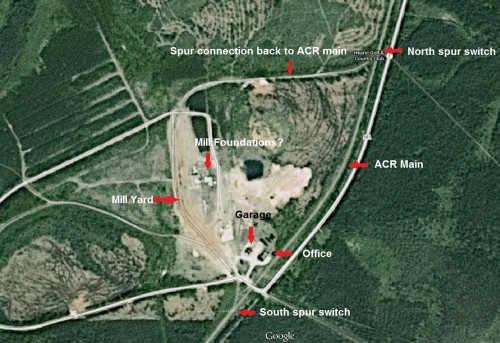 Satellite view of Mead. Most features are gone, but the traces can still be seen.

Unfortunately due to the remoteness of the area, I have found hardly any photos, track diagrams or other resources beyond what is listed in the employee time table to find out what things at Mead looked like. (The Sault Ste. Marie Public Library Archives has a pair of 1959 blueprints of a new bunkhouse and kitchen/diner buildings that replaced earlier structures, but this probably has little resemblance to what existed after the mill was built in the mid 1970s.) The track and mill buildings are gone today, so the only real clue I have to how anything was arranged is the scars left behind which can be seen on the satellite imagery on Google maps.