The old paper mill in Sault Ste. Marie, one of the original industries in town and an ACR customer for over a century, has recently closed down, and when I visited Sault Ste. Marie in July, the mill was in the process of being demolished. Fortunately I have some good photos of the mill from some previous visits to the area, so in this post we’ll look at the last 20 years of the mill’s operation.

All photos below taken by myself unless otherwise noted.

Note: this is the last in a series of posts covering specific locations on the ACR based on photos taken taken on my July trip to the former ACR.

St Marys Paper in 1992 from the International Highway Bridge:

Plenty of stockpiles of pulpwood logs fill much of the open ground on the property. Plenty of Wisconsin Central boxcars await paper loading. (This shot is before the WC takeover of the AC, but much of the mill’s output was exported to the US.) 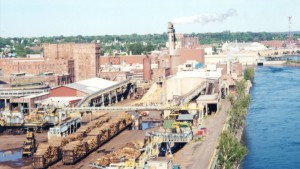 Those flatcars in the first photo in this set are most definitely former AC 2301-2373 series 40′ flatcars; these are likely owned by the paper mill and used for moving pulpwood logs around from stockpiles on the property. Note in the foreground of the 1992 photo above a pair of 48′ gondolas with similar home-made end racks. 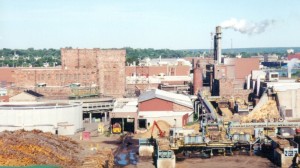 This photo shows what looks to be the log debarking and chipping machinery. A covered pipe or conveyor brings the chips into the pulping mill. Note the switcher poking out of the building at centre.

We can see from this last photo that the water treatment facility has been expanded since the 1992 shot. The tracks running roughly through the foreground head towards the paper loading warehouse off to the left, out of frame.

And here’s one of the mill switchers resting behind the mill, near the warehouse/shipping building. I wonder what’s become of this engine now? Sold to a new owner when the mill closed, or just scrapped along with any other rail equipment at the mill?

And one last photo from 2004, taken from across the power canal. Compare this last one especially to the photos below.

Closed sometime within the last few years, the mill is now being demolished. Everything but the remaining original sandstone structures has just about been torn down in these July 2013 photos. It appears that the original structures are being deliberately preserved for now due to their heritage nature, as they are over a century old. First three shots taken from across the power canal.

From the front of the mill, we can see that the main mill buildings, except for the remaining original sandstone structures, have been completely torn down, and the modern steel warehouse/shipping building at right is the last structure to go. It’s not obvious from this angle, but the back half of that structure is already gone and it’s definitely in the process of coming down.

6 thoughts on “St. Marys Paper, Then and Now”