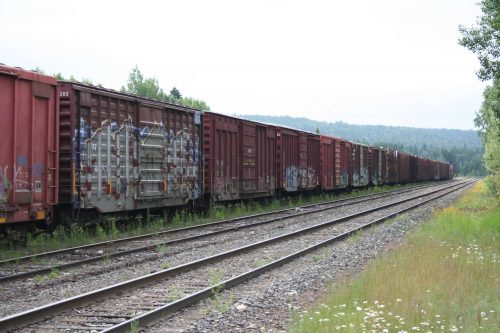 BR 50222 is an interesting woodpulp service boxcar with a storied history. The car was originally built for the Southern Railroad (SOU) by Pullman-Standard. The “waffle” pattern of the car sides accomodated load tie-down attachment points on the inside of the car. Southern acquired a large number of these “waffle-side” boxcars from Pullman-Standard, and this design would become a real signature car on that railway. Only a few other identical examples were built for some of the “Family Lines” railways which later became part of CSX.

This particular car was sold by Southern to Helm Leasing (HLMX) and was reconditioned for woodpulp service with end reinforcement and carbody vents in the corners and then saw service on BC Rail as BCOL 850222. When BC Rail let the lease expire, they were renumbered BR and dropped the leading 8 from the car number. Currently these BR cars are commonly seen in woodpulp service for Canadian Pacific. 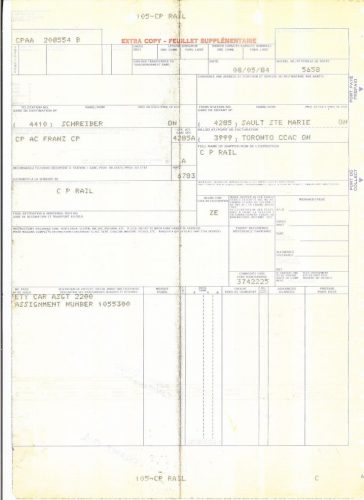 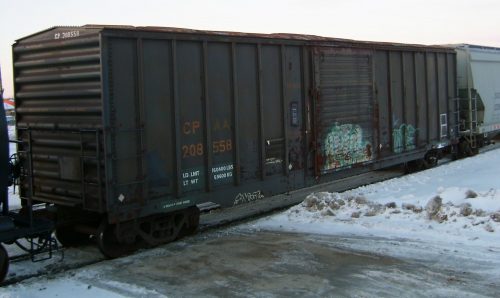 These cars bearing HS reporting marks are also common mixed in with the CP wood pulp service boxcars. These cars are leased to CP for wood pulp service by GE Railcar Services. These cars are a wild variety of seemingly random small sub-groups of cars from various builders (the above car is an FMC, while the bottom car is built by Berwick and coupled on both ends to other HS cars built by ACF) making any sort of even basic guesses as to their heritage impossible.

Most of these cars are older (early 1970s built) “plate B” cars rebuilt to raise the roof and extend the inside height from 10’6″ to 11’0″. All feature the distinctive carbody vents marking their assignment to wood pulp service. The Berwick car below also has reinforcing panels added to the car ends, as does a CP car coupled to the left of the HS 61554 above.

Additional leased cars bearing short line reporting marks SLGG, OAR, BR and YVRR (the former two being more common in 2004 and not so much seen now, and the latter two coming on the scene more around 2012 or so) are also commonly mixed in to the wood pulp fleet.

A pair of modern examples of Canadian Pacific boxcars in wood pulp service at Sault Ste. Marie on July 12, 2015, arriving back in Canada from Michigan to head back to CP via the interchange at Franz.

The top car was built new for CP in 1998 by Greenbrier’s Trenton Works in Trenton, NS. The bottom car’s history is a little more obscure. An early 1970s design from Pullman-Standard, the car’s original owner before coming to CP is unknown. It would have been repainted and renumbered into its current identity in 2001 (and probably rebuilt to raise the roof and add an additional 6 inches to the interior height of the car at the same time).

The flat plates on the sides of both cars are protective covers for vents in the carbody. These vents are typical on modern cars in wood pulp service to allow moisture in the product to escape.