The last CN train L572 to leave Hawk Junction departed in the evening of January 30 for Hearst. While CN will still be operating between Hearst and Oba, how that will be operated appears to be in a state of flux still, with those details to be confirmed and ironed out.

No local word on whether ACR trains have begun operating north of Sault Ste. Marie yet, but various news reports over the last few weeks have indicated the new company will employ 27 people and operate between Sault Ste. Marie and Oba with eight locomotives – six SD40-2s and two GP40-3s.

Not much word on the remaining four units so far, but WAMX GP40 4051 (Watco standard black & yellow paint) was spotted in the yard in Sault Ste. Marie, Michigan just today per a facebook post from a northern Michigan railfan group. (Presumably this will be for the ACR, but could also be for Watco’s new Grand Elk Railroad operation between Trout Lake and Munising, MI.)

The new railway is also intended to take over operation of the Agawa Canyon Tour Train, so presumably the passenger cars and engines associated with that train would be included in the sale of the railway.

Watco has a page up on their site now highlighting their new Canadian railway:

The new name and logo of the railway pay nice homage to the history of the Algoma Central, bringing back the black bear, and keeping the ACR initials* and also highlighting the brand of the Agawa Canyon tour train.

* It looks like the new reporting marks for the railway may actually be “ACR” (vs. AC for the original railway, which reporting mark is still active under CN and used on a number of log cars).

Not much is known yet about what operations under Watco will look like, hopefully we will find out more in the coming days. 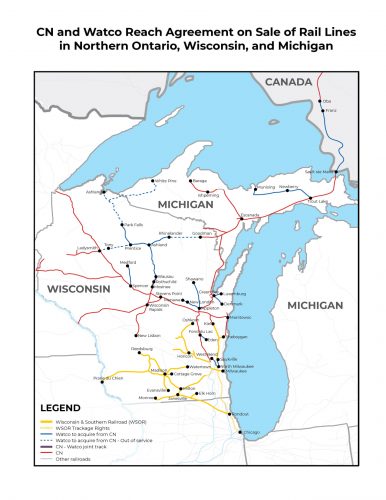