Earlier this summer I acquired a small collection of ACR images from an individual in the states. The slides appear to have been primarily taken on the occasion of a railfan visit to the Algoma Central, and while of varying quality, contain some interesting content. The photographer appears to have gotten a cab ride (in a trailing unit) on both a northbound and southbound freight over the Soo subdivision, a caboose ride on an ore train on the Michipicoten branch and on the Northern sub (at least as far as Franz).

None of the slides were marked for location, date or photographer’s name, making identification a little interesting in some cases. However most of the slides had numbers written on the slide mounts allowing them to be put into proper sequence, at which point a story unfolded and certain views could this be related to each other. My own ride on the Tour of the Line at the beginning of October also helped to familiarize myself with the line and I could thus confirm a few of the location identities.

While the slides are undated, a few items have allowed me to date the images to the winter of 1980-81 with a pretty high degree of certainty. One image in the collection is of baggage car 211, which was renumbered 302 in the spring of 1981 with the arrival of the 200-205 series GP38-2 locomotives. Another image of the ACR’s scale test car clearly shows a 5-80 reweigh date on the car, which pretty nicely brackets the time frame of the images to a specific year.

The background thus identified, here follows a few selections of interest, in no particular order. 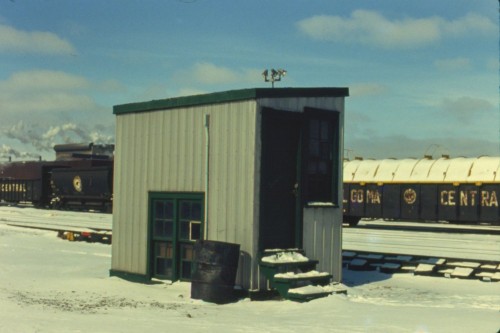 Scale house at Steelton yard. The ground level window on the rear of the structure seems an odd feature. In the background is the ACR’s sprawling Steelton yard and the Algoma Steel Corporation mill. Several AC freight cars including one of the ACR’s unique 61′ bulkhead gondolas, an even more unique curved side “bathtub” style hopper and a covered gondola for coil steel service are visible. 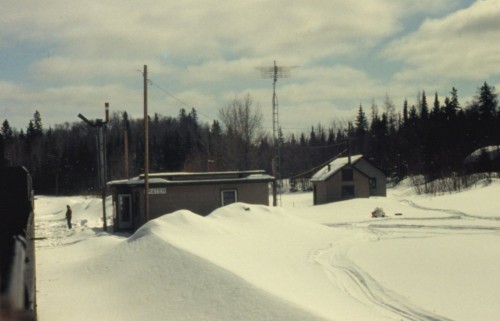 Frater station. In deep snow with snowmobile tracks all over. There are other better photos of the station building at Frater available online, but this nicely relates the station to the two small outbuildings behind. The station has long been torn down, but those two small structures still exist today. The grey structure appears to have been converted into a small cabin; note the new “bay window” added to the front of this structure, which appears to be salvaged material from the station. 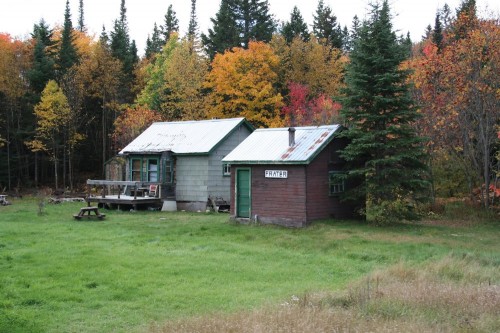 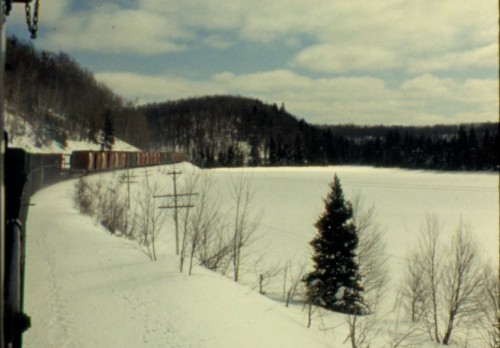 The location for the above photo would appear to also be at Frater, just south of the station, showing a northbound freight running along the shore of Frater Lake. Note the long string of CP 40′ boxcars in the train; at least a dozen can be counted before the train curves away. Likely these are empties heading back to Schreiber on the CPR for woodpulp loading. This is an interesting photo for highlighting the volume of this traffic over the ACR. 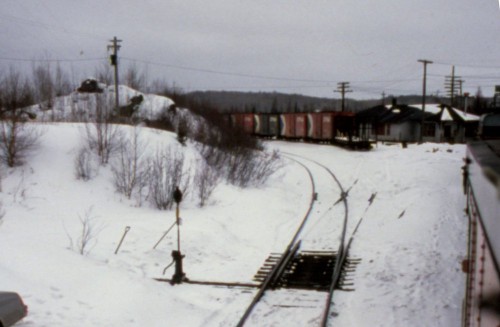 Crossing the CPR at Franz, riding in the caboose of a northbound freight. More CP 40′ boxcars are spotted in the interchange track; one is painted in green which signified newsprint service. All of the cars seen here are probably 8′ door cars (all the newsprint assigned cars were 8 footers) in service hauling woodpulp from mills along the Lake Superior north shore.

Speaking of Franz, here’s a look southward off the rear of that caboose: 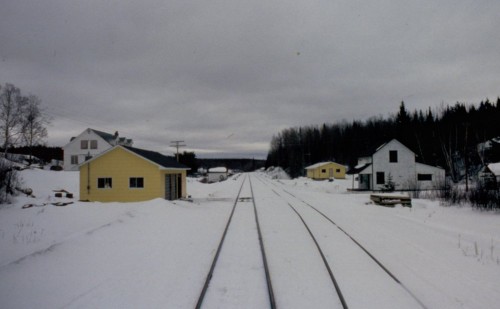 All of the structures visible in the above photo, except for a small white speeder shed roughly in the centre of the photo, still stand today. The station at Franz was closed in 1992 with the end of train order operation on the ACR, and ended up being moved to the community of Dubreuilville. 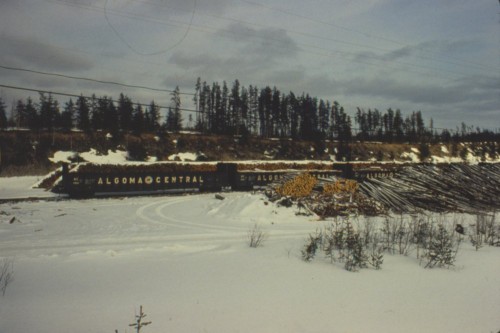 The above photo was tentatively identified as the ballast pit just north of Perry siding, based on the excavated appearance of the embankment in the background and its sequence number and relation to other images/locations. This was able to be conclusively confirmed when I rode the ACR passenger train on the last day of September and easily recognized the location.

The above images makes it a little unclear whether any ballast was still quaried from the gravel pit here during the 1980s, but interestingly there was clearly quite an active pulpwood loadout here during this time frame.

Perry pit today, the rails for the spur are still there, but the main track switch has been removed and the site is abandoned: 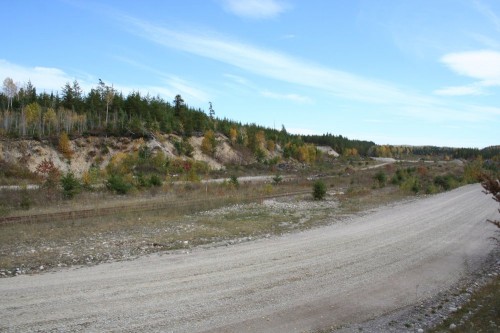 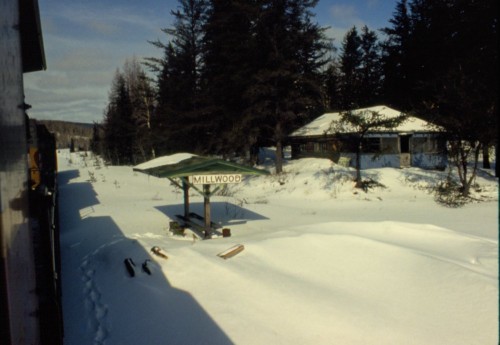 A simple passenger shelter at Millwood (mile 212.9). Simple shelters like this were erected at several flag stop locations along the line.

That’s all for tonight, probably more to come periodically.