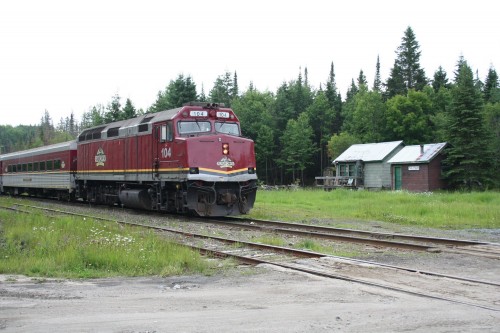 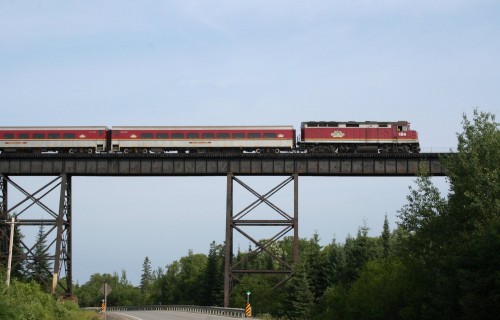 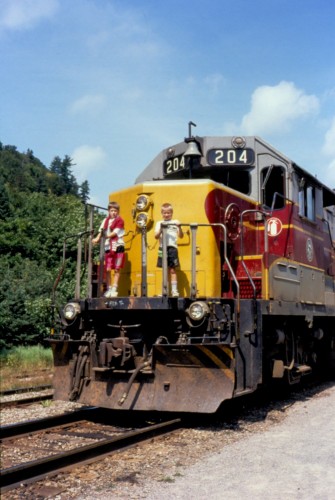 Regular passenger service on the ACR was provided by train nos. 1 and 2 from Sault Ste. Marie to Hearst (and vice versa). 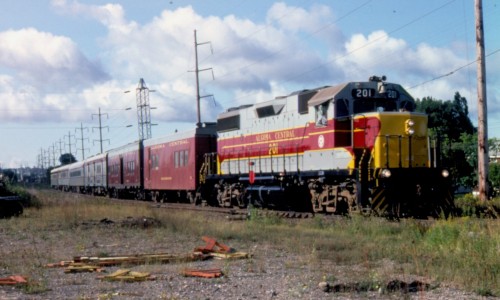 In the 1980 timetable, no. 1 was scheduled to depart Sault Ste. Marie at 9:30 am daily except Mondays (with no. 2 therefore running daily except Tuesdays) in the summer timetable, and only Fridays through Sundays (Saturday to Monday for no. 2) an hour earlier at 8:30 am in the fall/winter timetable.

If you turn back the clock a bit to the 1950s-1960s, passenger service was also included on the Michipicoten subdivision, and nos. 1 and 2 were actually daily excluding Sundays between Sault Ste. Marie and Michipicoten, connecting with trains 3 and 4 to/from Hearst at Hawk Junction. (Although in the late 1940s to early 1950s, three days a week this ran instead as Mixed (freight and passenger) trains 5 and 6. If you go far enough back in history, all passenger service was in mixed trains.) Passenger service on the branch was discontinued in the mid 1960s when Trans-Canada Highway 17 was completed through the area.

In more current times, CN continued to operate the regular passenger service (as trains P631 and P632) until early 2015, when for funding and political reasons the service was undertaken by a new operator (Railmark) which unfortunately – again, due to financial and political complications – was not successful and passenger service was terminated in July of 2015. As of this writing, local stakeholder groups are searching for and negotiating with potential new operators to try to save the service.

In the 1950s, recognizing the scenic beauty of the Canyon and the tourist potential, the Algoma Central Railway established the privately owned Agawa Canyon Park and developed the location as a destination for a day trip tour out of Sault Ste. Marie on the “Agawa Canyon Tour Train”. 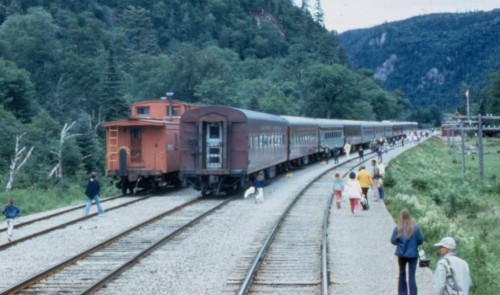 Some of the older coaches were upgraded with modified steps for easy de-training of passengers at the siding and service started out with regular train no. 1 dropping off a dining car and a coach or two in the siding to be picked up later by the southbound no. 2. This service grew in popularity throughout the 1960s with more and more cars being regularly set off in the siding at Canyon. By the early 1970s so many cars were being used in the Agawa Canyon Tour Train service that an extra train was run to exclusively handle the tour cars for Canyon. By the mid 1970s, it was permanently added as a regular daily train (nos. 3 and 4) in the summer timetable. Also from 1969 to 1974 “new” passenger cars were acquired to expand and replace the existing fleet, with coaches, baggage cars and dining cars acquired secondhand from such roads as Canadian Pacific, Central of Georgia, Southern Pacific, Santa Fe, Illinois Central, Union Pacific, and Denver & Rio Grande Western.

Equipment for the tour train service was upgraded again in the early 1990s with cars acquired from VIA Rail, and most recently in 2009 with the purchase of the Rio Grande Ski Train from Denver, Colorado. The Agawa Canyon Tour train still operates on a daily basis during the summer as CN P633 (for the entire round trip).

The long term future of the train is however uncertain as CN has been indicating they are not interesting in being in the passenger business. The original plan when Railmark assumed operation of the regular passenger service was for them to eventually operate the tour train as well; with the new search for another replacement operator, the idea as I understand it would again be to have that operator take control of all passenger service. 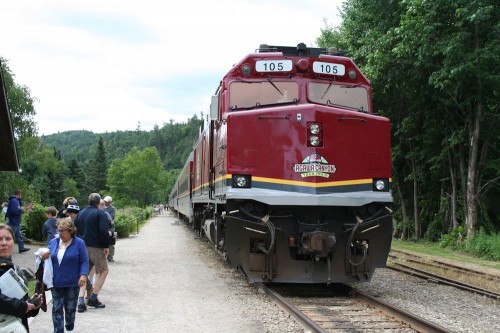 Somewhere around the late 1970s the railway also began running a weekend-only fall/winter version of the tour train service, with tour coaches being exchanged by regular trains no. 1 and 2 at Eton, without the stopover at Canyon park. In the 1990s and early 2000s the “Snow Train” ran as a separate train in its own right, still running through the entirety of the canyon and turning at Eton. This train has not run in several years now. 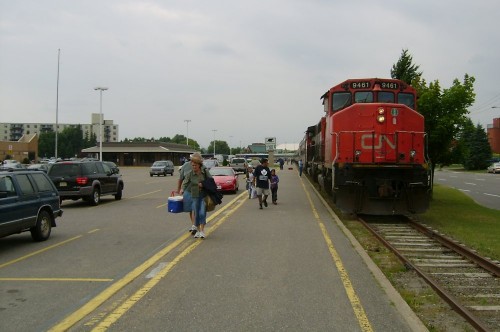