This post is mainly just included for completeness for the hopper series, as the details are basically just assembled according to the kit instructions, although as Walthers doesn’t really sell cars with modeler-applied parts anymore, I should perhaps note a couple of things. 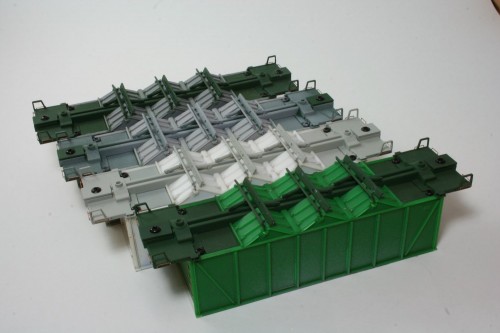 Here’s four of the around two dozen cars currently in progress, with many more still in boxes waiting their turn. You can see the door connecting/locking bars and spring details all installed. You’ll note if assembling a kit car, or re-assembling a stripped down car (in which case you’re not likely to have a diagram/instruction sheet) that there are two distinct versions of the bar details that definitely have to go on in a certain direction, as one has an extra bit of the locking mechanism detail and needs to align with the cast lock detail on the hopper bottom. (However the arrangement of the mounting pins makes this impossible to screw up.)

If you’re adventurous you could also replace the flat thick kit pieces with styrene channel to better represent the prototype parts in finer detail, replace the tail end bits of the door bracing with additional bits of styrene strip, fabricate the extra loop for the door lock on the appropriate bars. I did not do this.

One major note that apparently needs to be mentioned is the door springs, which attach to the door bars on one end, and the centre sill of the underframe on the other to cushion the impact of the doors dropping open when the car is unloaded, as the rapid-discharge hopper design basically opens up the entire bottom of the car. You can see them installed in the model photo above, and half-visible in shadow to the right side of this detail photo (courtesy of Blair Smith) below: 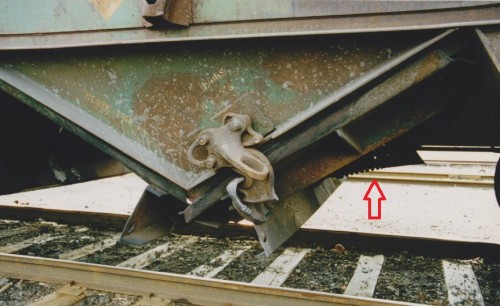 If you get some of the latest Platinum Line releases from Walthers, any of their cars without additional detail parts for air-actuated doors (i.e. a big air tank mounted on the car end) have omitted the spring details. And unfortunately, since the detail parts are not add-on pieces on an included parts sprue, the springs are just not included in the box.

Apparently Walthers thinks that only the cars with air-actuated equipment has these door springs, which is entirely false. Sadly there’s not likely too much that can be said there, and since they don’t stock additional parts (I tried and failed to get replacements from them, and they seemed not to consider the missing parts a mistake) I will likely be saving a couple of parts sprues to make a mold and copy-cast in resin the needed parts for about 2 dozen such cars missing the springs.