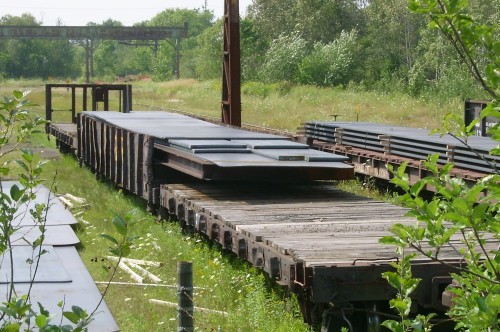 These unique 3 car sets have got to be one of the most unusual cars on the Algoma Central.

Each “car” is made up of three units, which are themselves all former Algoma Central equipment from other series. The base of the car is a former 3501-3850 series gondola with a heavy steel frame made up of welded I-beams extending well out beyond the length of the central car, and a 40′ idler flatcar permanently coupled at each end. Note the “B” end car appears to be a cut down 2300 series flatcar with part of the end rack remaining and the brake wheel lowered. The “A” unit is likely formerly from the 2200 series of 40′ standard flatcars.

These two cars photographed on August 18-19, 2004 at the Welded Beam Mill and Steelton yard respectively.