In the late 1970s and early 1980s, Canadian Pacific converted several hundred old 40′ boxcars into woodchip gondolas via the simple expedient of cutting away the roofs of the cars. While there were some variations (including some older International of Maine conversions that had the height of the sides extended and doors widened to 8′) the standard conversion in the 1980s was a simple 40′ boxcar with standard 6′ door with the roof cut away and the original sliding doors replaced with a two-piece hinged wooden door.

Source cars for these conversions were drawn from various different original series, and there’s a lot of variation in these converted cars. 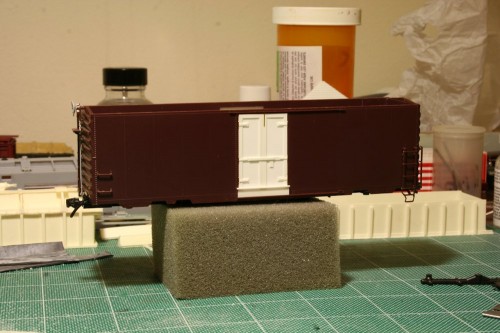 This car is a Intermountain kit for a Pullman-Standard “PS-1” 40′ boxcar. (“PS-1” was actually Pullman-Standard’s catalog designation for ANY boxcar they produced, although model railroaders have (somewhat erroneously) come to associate the term with just Pullman-Standard’s earlier post-war designs.) The body details are assembled pretty much as according to the kit although the roof and doors are left out. 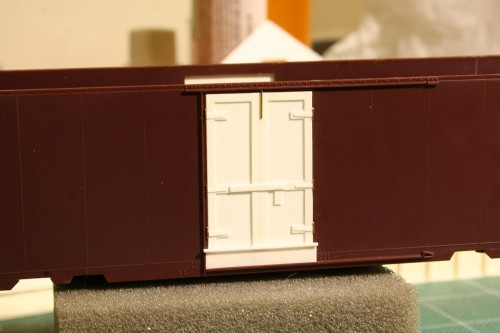 The main visual feature of the car (apart from the missing roof) is the new chip doors, which necessitated the scratchbuilding of said doors from styrene.

The new door is a piece of .020″ styrene sheet cut to fit the door opening, trimmed with .010″x.060″ strip for the edges of the door panel. The horizontal door locking bar and the “mounting pads” under the hinges are pieces of .010″x.040″ strip. The flat parts of the door hinges are represented by pieces of .005″ styrene, basically eyeballed and cut with a razor blade, and the actual hinge parts at the edge of the door, and the vertical locking bar at the top of the door are bits of thin brass wire. 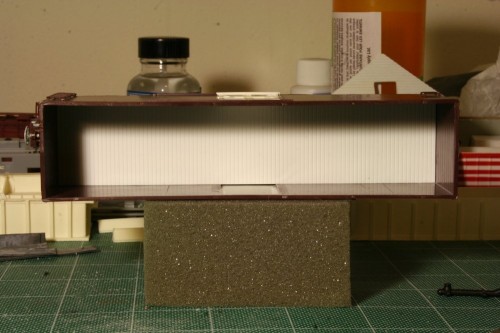 Because the car is open, and thus has little or no way to hide any weight, I inserted a styrene false floor into the car which hides a thin layer of sheet lead flashing to give the car weight. 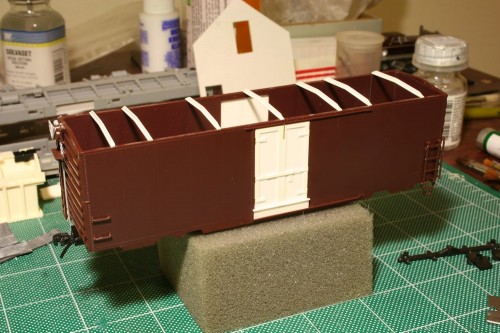 The roofs on most of these cars were removed simply by torching out the panels in between the roof ribs (carlines). Most of these cars kept these ribs in place to hold the car together, but over time these got banged up and damaged and cars would be missing many of them. I used T-section styrene shapes to make a representation of these remaining roof ribs, leaving several out as “missing”.

This pretty much completes the major details of this particular car; next step is painting.