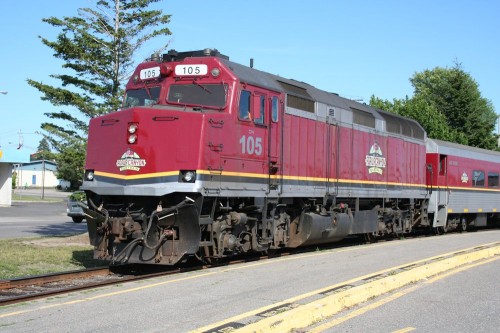 In 2009, CN acquired the equipment that had been in use on the former Ski Train out of Denver, Colorado. This purchase consisted of 3 ex-Amtrak F40PH locomotives and 14 coaches, which ironically were originally built in 1968 for CN where they saw regular service on the Toronto-Sarnia/Windsor corridor.

Initially pushed into service in 2009 still in their old yellow-orange Ski Train colours, the equipment was extensively refurbished in 2011-2012 and repainted into a handsome new interpretation of the Algoma Central’s traditional wine red and grey passenger colours.

The red main body on the locomotives and cars are nicely accented by a yellow and black stripe and a grey lower body and roof. The lettering used for the road numbers (and the small CN logo above the number) is a light grey. 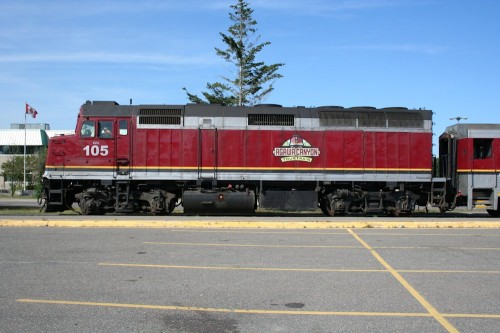 Part of the refurbishment of the equipment included TV display screens in the coaches featuring a live cab view transmitted from a camera in the engine. Look closely in the windshield of the 104 in the below photo, or the 105 in the photo at the top of this post and you can see the video camera mounting next to the centre divider between the two front windows. 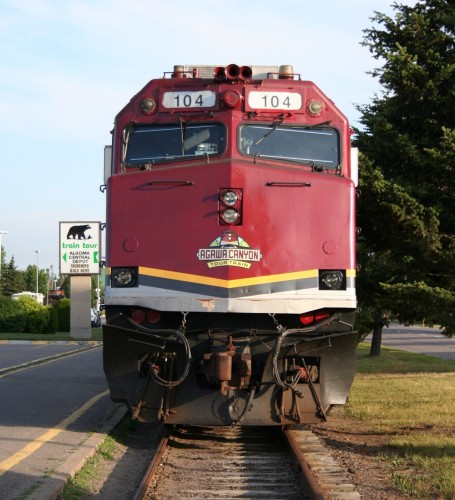 When we come to the rear of the units, close observation reveals a couple of minor differences. 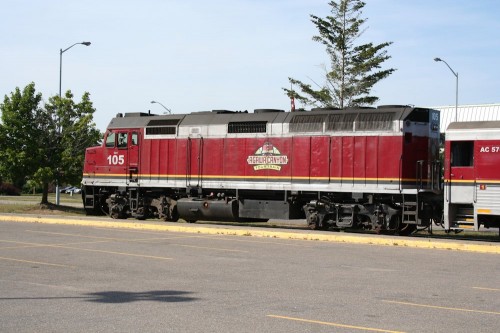 While on CN 105 (the first unit refurbished and repainted into the new colours in 2011) above, note that the black along the angled part of the roof also carries directly across the end of the locomotive, and the unit’s road number in grey is lettered at the top of the carbody, above the read headlight.

On CN 104 (and 106 exhibits the same pattern – these two units were repainted in 2012) note that the black does not carry over onto the end of the unit, and instead of a large road number at the top of the body, there is a small CN logo and number below on the headlight, on the door. 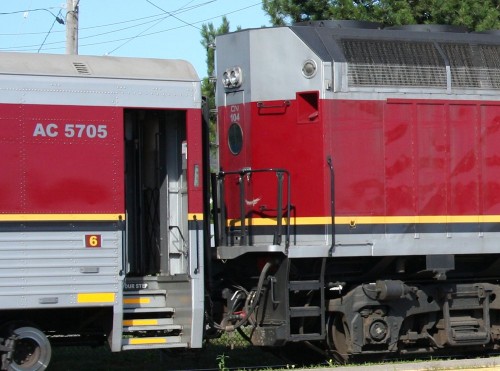 During the peak fall colour season, all three units are used together on the tour train. When I was in the Sault at the end of September, the Agawa Canyon Tour Train ran north with 105 and 104 on the head end, and 106 bringing up the rear. At Canyon, the 105-104 had run around the train and the tour train returned to Sault Ste Marie with all three units in consecutive order on the head end, 104-105-106.

Having units at each end of the train means that there is always a unit coupled to the coaches to provide electrical power at Canyon. (And also there is no way to turn an engine at Canyon.)

During the slower summer season, the Tour Train runs with one F40PH at each end (and returns south in this configuration with no runaround at Canyon). During this season, the unused third unit is freed up to provide locomotive power to the regular passenger service. 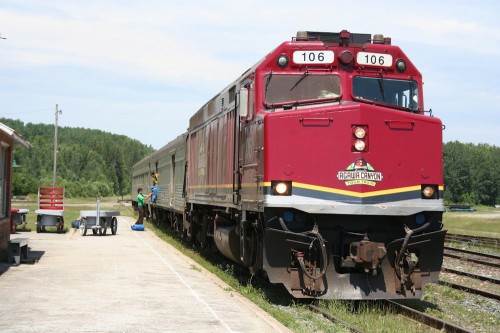 CN 106 on the southbound passenger train at Hawk Junction. July 2013.

These three units were all originally built for Amtrak in 1977-1978. They were built by GM’s Electro-Motive Division (EMD) and given the model designation F40PHR, with the ‘R’ indicating that these units were built at least in part using in parts from SDP40F locomotives that Amtrak was replacing in the 1970s. Otherwise these are the same as a standard F40PH.

The three locomotives were sold to Ski Train in 2000, where they operated until the spring of 2009 and were acquired for the Algoma Central Railway.