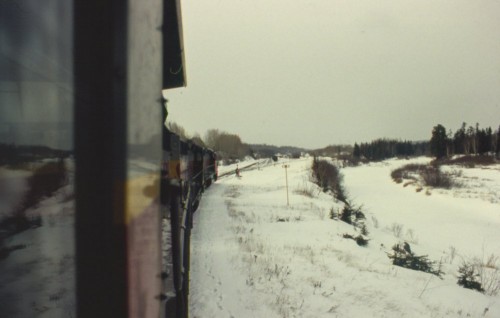 A northbound freight with 3 SDs pulls into Hawk Junction yard. This photo clearly shows the relation of the south end of the yard to the nearby river. 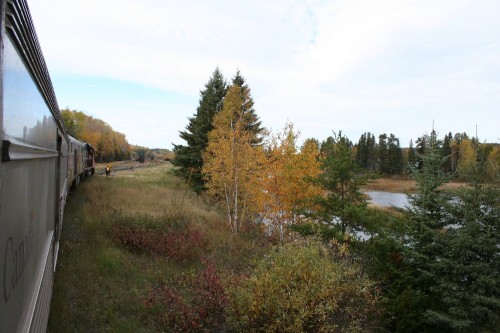 Nearly 33 years later, and the trees have grown in quite a bit along the river bank. 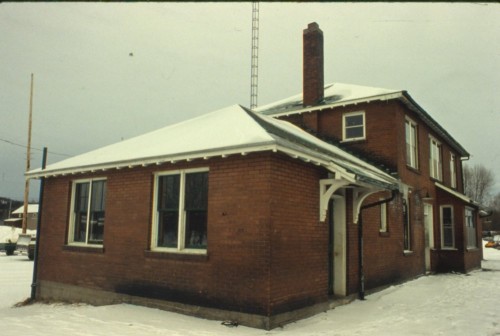 Hawk Junction station. Interestingly, there are no name boards mounted on the station at the time this photo was taken.

Compare to today, the station is largely unchanged, except for some new floodlights on the front and the large communications antenna erected at the south end of the building. Oh, and proper name boards. 😉 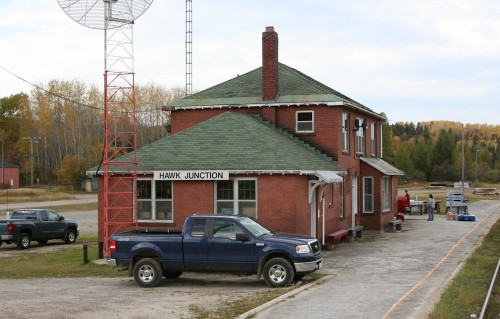 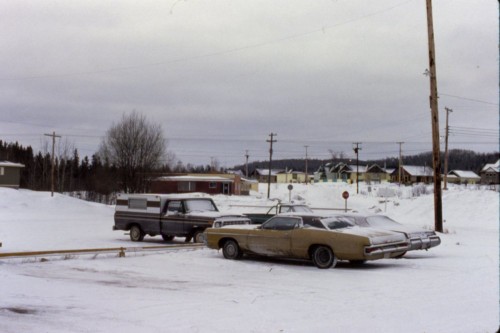 Parking lot behind the station, with a view down the main street in town. Note the corner of the structure at the extreme left, which is the modern crew bunkhouse at Hawk: 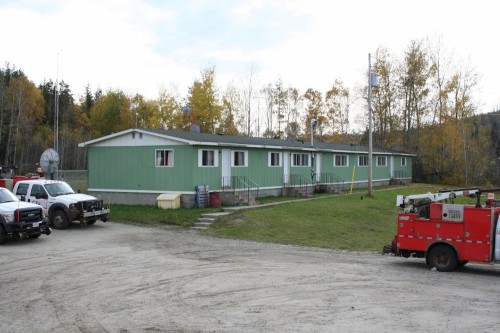 That pretty conclusively dates this structure’s existence at least to the late 1970s. 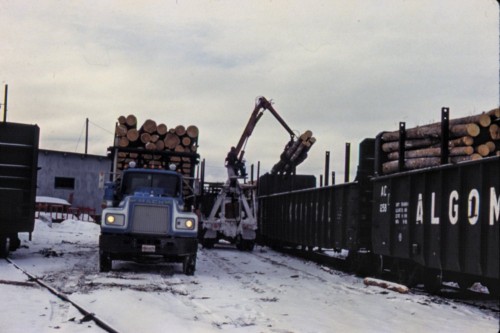 This was one of those photos that had me mystified as to its location at first, as the box of slides was completely jumbled and in random order. Once the slides were put in sequence and I realized this was smack in the middle of a large group of other slides all taken at Hawk Junction, it became clear as day.

This view shows gondolas being loaded with pulpwood on the old team track at Hawk Junction. The grey structure is the former freight shed and the track at left, also filled with gons on this day, is the shed track. Unfortunately there are very little photos of the Hawk freight shed available. The only other photo I’ve found so far is this 1984 photo online, taken from another cab ride on the ACR. 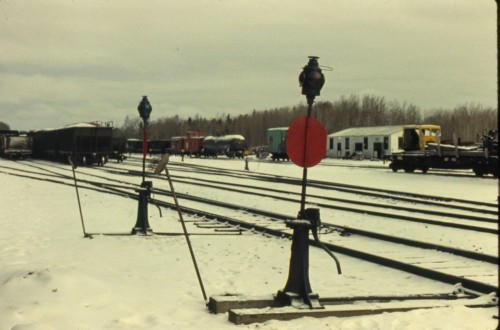 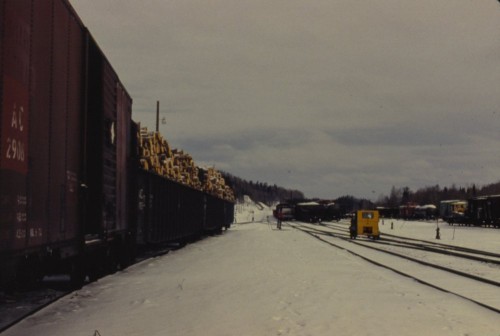 Looking northward at the actual junction switch at Hawk Junction. The cars at left are spotted in the shed track; this is basically the reverse view of the previous photo of the freight shed and pulpwood gondolas. The Michipicoten Subdivision rises away at dead centre. (Click on the photo to bring up the large size for a better view.)

Note how the Michipicoten sub diverges from the main line at the junction switch at exact centre of the image. (The first track to the right with cars on it is actually the Northern Subdivision main; a train, probably made up and prepared to head south, is currently blocking the main track.)

When I rode the passenger train at the beginning of October, I had a hard time reconciling the current track arrangement with my memory of photographs such as the above image and similar images mostly from the 1970s plus track maps and older aerial photos in some of the published books on the ACR. 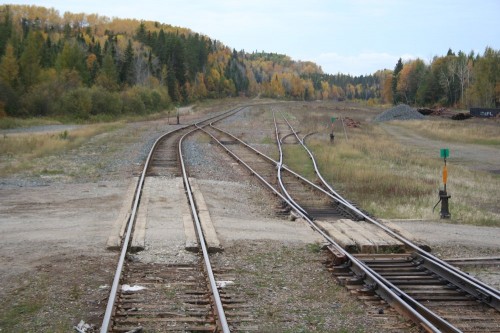 First of all, when we closely compare this arrangement in the above photo to older photos and maps, it can’t be directly correlated. The older photos show a crossover to the main track, and then a ladder that branches to the right. In the above photo we see the ladder, but the (removed) switch to the abandoned track between the current main and the two remaining tracks doesn’t relate to the older track maps. Simply comparing to the track map, that entire track doesn’t seem to fit. 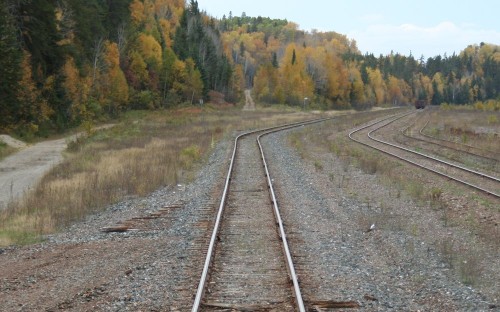 Here we can also see the abandoned Michipicoten Subdivision directly aligned with the current main line, while the 1980 photo above (and similar photos, and published maps and aerials) clearly shows that the branch should be offset to the left of the Northern sub. main. Note at foreground the removed switch to the team track and shed track.

It becomes pretty quickly clear that a rather significant track realignment has taken place here. It’s obvious that the main track has been realigned from the north end of the station platform to align with the Michipicoten sub, with the first several hundred feet of the former branch becoming a main track for the Northern subdivision, and the junction moved several hundred feet north. Where the yard curves to the right, the original Northern sub. main has been realigned to connect to the track that was formerly the Michipicoten sub main.

So, the current main (at least for the straight portion in the foreground of the above photo) is actually originally the first part of the Michipicoten branch, the first yard track (now torn out) is the old main track of the Northern sub. However there’s one more sticky point, and that’s that the old maps and photos show that the first track next to the old main was a drill track for the south yard, and connected to the main just beyond the curve, with the remaining yard tracks following the curve. So all of the yard tracks must also have been cut and realigned to different tracks beyond the curve. If the first portion of the Michipicoten sub is now the current main track, then the old portion of the main track was realigned to track 1. The drill track must have been realigned to connect to track 2, and the old track one realigned to track 3.

This map, showing before and after, shows how I believe things to have been re-aligned (click on the image for a larger version): 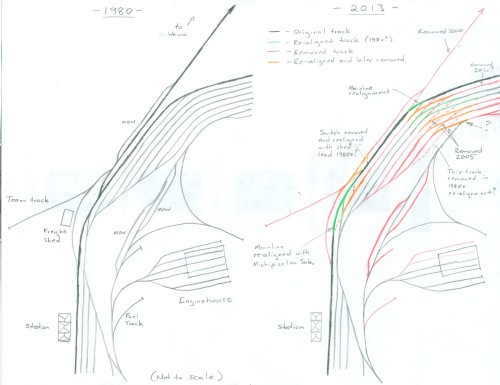 Now, reference again that 1984 photo showing the freight shed mentioned above. The middle piece between the front windows just manages to not obscure the switch arrangement there, and we can see it matches the current arrangement. And this photo from the same set, taken roughly at the same location and angle as my last photo above (except from a locomotive cab instead of out the back door of the passenger coach), shows the new junction switch. If the slides are from the winter of 1980-81, and by the fall of 1984 the track arrangement is completely different, that pretty safely places the date of this rebuild to the very early 1980s. The track doesn’t necessarily look really fresh in that photo, so the work may have been done as early as the summer of 1981?

It kind of begs the question why such an expensive rebuild was done, and what value was actually realized by the new track arrangement, which doesn’t really seem like it would be all that different operationally. But, with my intended modeling timeframe being summer 1985, this certainly has a big impact on how I design my Hawk Junction yard someday – the published aerial photos and track map I’ve always used as reference actually don’t reflect the arrangment I should be using.

Since the closure of the iron mines and sinter plant at Wawa in 1998, Hawk Junction has been dying a slow death. As the Algoma Ore Properties operation was the only customer on the branch, abandonment was quickly applied for and granted in 2000. By 2001 the rails were ripped out and Hawk Junction was no longer truely a junction. Several yard tracks and the team track are gone, and the engine house is only used by MOW crews now. Daily freight trains still serve Hawk Junction, but it’s little more than a crew change point now, and traffic is a shadow of what it was.