This weekend I got back to working on a couple of assorted modeling projects that I’ve had on the workbench for a while. One of these is this trio of 40′ wood boxcars.

These models represent cars from a 100-car batch built in late 1927 numbered AC 3101-3200; by the late 1970s any of these cars still running would have been restricted to maintenance service; in 1970s-1980s freight car lists in the Official Railway Equipment Register the Algoma Central lists no boxcars in interchange service. My three cars will therefore likely spend the majority of their life parked in a side track with other maintenance equipment at Hawk Junction yard as material storage cars, or moving occasional OCS (“On Company Service”, i.e. non-revenue) cargos. Here’s a good prototype photo from Ted Ellis’s Algoma Central site of one of these cars in a work train at Frater (mile 102) in 1977:

These three cars were modelled using Accurail’s 40′ wood boxcar kit with wooden doors and ends. This kit is a pretty close match to the AC cars; they might not be 100% dead-on – I note some minor differences in the horizontal metal straping at the top of the vertical end braces, and the doors stops are located differently, but the side bracing looks pretty much the same – it’s close enough for me.

I chose not to do a lot of fine detailing on these cars; while Accurail’s details (i.e. grab irons and ladders) are molded onto the car body and not separately applied freestanding pieces, Accurail’s tooling is fairly well rendered, and on the wood car it’s not really bothering me that much. If it was a steel car, I’d probably upgrade the detail. Might seem a bit quirky, but in this case I can accept the level of detail of the car body.

The shells were actually painted quite some time ago; these were some of the first things I painted while practicing with my new airbrush. I sprayed the shells with CN Mineral Brown from TrueLine Trains; really any shade of generic “boxcar red”/freight car brown will do here. 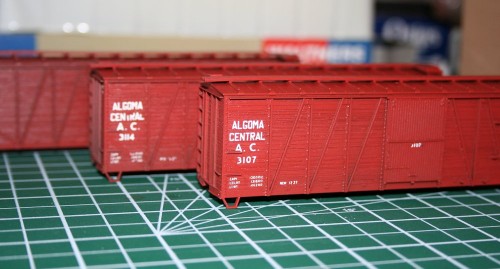 Once all three cars were lettered, I weathered them up with Bragdon weathering powders applied with a stiff brush. I kept mostly to the darker browns – burnt umber and burnt sienna – as these are wood cars I avoided the oranger rusty colours. I also used a bit of black (soot) on the roof to darken it and accent the roof ribs; and also on the sides to darken and bring out the board detail of the sides. The Accurail car has a lot of grain molded into the sides and accenting this really gives the car a more worn appearance. I also tried concentrated the darked colours around the door opening and the end of the door track where rain would tend to wash off the car roof to try to make these areas a bit darker and more weather-worn. This wasn’t precision detailing, and it spreads out a lot by working it with the brush, and the effects of the powders are actually very subtle, but I think it did generally work to darken the general area just a bit. It’s not necessarily really consciously noticeable that those areas specifically have been darkened, but it brings out the details and the wood grain of the sides, and darkens and varies the colour of the car a bit. And on a couple of the cars even from a distance (maybe even more from a distance) the door and right side of the car is slightly darker in colour than the left side where the majority of the lettering is.

I then gave the three cars a quick spray of Dullcote last night to seal the lettering and weathering. Here’s a pair of the cars mounted back on their underframes and posed on my switching layout with one of my Overland cabooses: 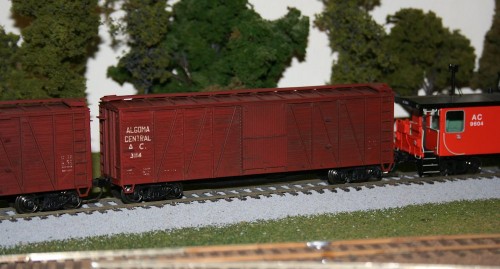 There’s a few details to be done yet, and the underframe needs some minor detailing and then the frame, trucks and wheels all need to be painted/weathered. The completed car will probably get some additional road weathering along the bottom at that time yet as well, but that’s another day.