Searchmont, mile 31.5 Soo subdivision, is a familiar location on the Algoma Central, as it’s not too far from the Sault, and one of the very few places along the ACR with road access. Closed in the late 1990s, this station still stands and has been designated as a heritage structure under that act that protects old railway stations, however the building is totally derelict, and heritage status or not it’s just a matter of time before nature takes its course on this historic wood-frame building.

I chased the Canyon Tour Train north to Searchmont while visiting the Sault, and took the opportunity to take a few detail photos around the old station. Decrepit and overgrown, it’s a far cry from quaint little station it once was.

Viewed from the cab of a northbound train, about to receive orders from the operator at Searchmont in 1974:

In 1992 the railway has switched to Occupancy Clearance System (OCS) radio dispatching and the station is no longer a train order office (note the train order boards have been removed) but still remains open as an active passenger station:

Searchmont station in 2013. Mostly boarded up; some of the second floor windows are intact, but a few are missing, exposing the building’s interior to the elements. The drywall or plaster on the second floor interior walls is totally disintegrating. 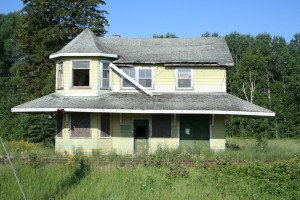 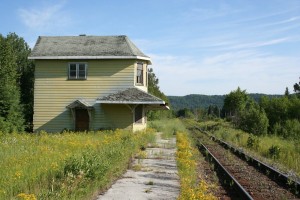 2 thoughts on “Searchmont, Then and Now”