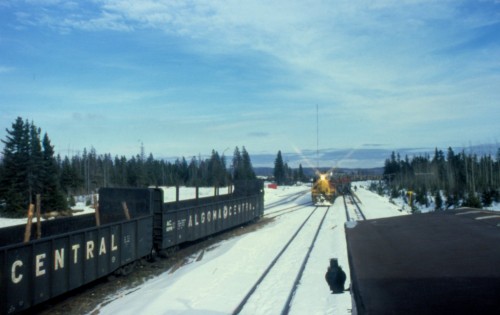 Trembley, at mile 22.5 of the Michipicoten subdivision and approximately 4 miles to the west of Wawa station, was in the 1970s and 1980s the site of a passing siding and a pair of pulpwood loading operations. One pulpwood spur was owned and operated by Abitibi Paper (later St. Marys Paper), loading pulpwood for the paper mill in Sault Ste. Marie, while the second spur was operated by Newaygo Timber Co., which also operated the large pulpwood camp at Mosher, and from 1974-1985 a lumber and chip mill at Mead.

In the lead photo above, taken from the caboose of a Michipicoten bound ore train, the spur at left with the bulkhead gondolas is the Newaygo spur, while the pulpwood extra in the background is switching the Abitibi spur in the distance.

Above is a rough diagram of the track layout at Trembley in the early 1980s. Revision notes on a copy of a railway drawing in the archives at the Sault Ste. Marie public library reference several other tracks since removed, and employees’ timetables indicate “(Yard)” in the House Track capacity column. Unfortunately this particular document at the archives was a photocopy of the original, so the erasures and modifications to the original drawing can’t be made out to definitively lay out those removed tracks.

Whatever tracks might have existed previously and removed before then, in the 1980s Trembley featured the passing siding, an active track scale and the two pulpwood spurs. The Newaygo spur was abandoned by the forestry company in approximately 1985 when Newaygo shut down their operations at Mosher and Mead. After 1985, this spur is still listed as existing but noted as a “Company Spur” meaning ownership has defaulted to the railway for use as a team track or supply spur. The St. Marys Paper spur was also relisted as a “Company Spur” in 1987, with both spurs being removed in 1990 or 1991.