Searchmont, at mile 31.5 of the ACR’s Soo Subdivision was named in honour of an early company official. A large station was built here around 1900, with an elegant round smoking room on one end and freight room on the other and quarters for the station agent and his family on the second floor of the building. 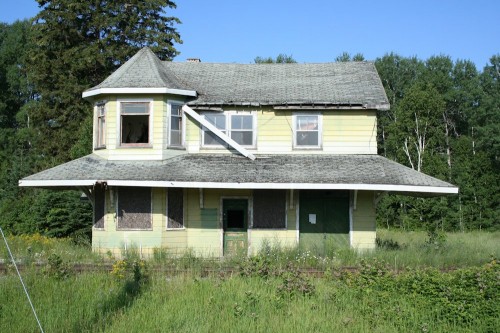 Sadly the round smoking room was damaged by fire and the freight room cut back early on in the station’s history, so what stood in later years was really about half of the original structure. The station still stands today, although a little worse for wear (the canopy over the platform has collapsed since the above photo in 2013). A local preservation group has formed and acquired the station however, and is attempting to save the structure. 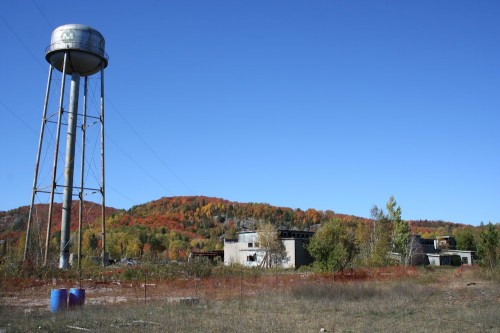 In the early part of the 20th century, there were charcoal kilns in the area, and later a gravel pit. In 1958, Hay & Co. constructed a lumber and veneer mill here, which later operated under Weldwood of Canada and G.W. Martin before closing in 1990. The ruins of the mill still existed up until 2013 (as of a 2015 visit the structures have been fully demolished), but the former railway spurs reaching the mill are so overgrown they’re hard to see unless you’re actually standing directly on them. I couldn’t even find where the south spur went.

Searchmont was not the location of a passing siding; sidings were located at either side of Searchmont at Northland (mile 24.7) and Wabos (35.9). The much shorter siding at Goulais (mile 30.7), just across the river and less than a mile from Searchmont station was downgraded to a “house track” for car storage by the mid 1980s.