Hearst was established as a division point on the National Transcontinental Railway with a medium sized yard, engine facilities and a large station (since torn down and replaced with a small shelter). The wikipedia page for Hearst suggests the town site may have originally been named Grant, before being renamed Hearst in 1911. 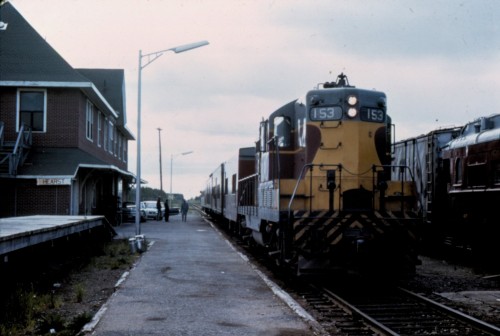 The northbound ACR passenger train is shown shortly after arrival at Hearst on July 2, 1972. R.J. Schwenk photo in my collection.

The Algoma Central reached Hearst in 1914, connecting to the NTR at a point just to the west of the yard. For the next century, the ACR would share facilites at Hearst yard, with dispatching between Hearst and Hearst Junction under control of the host railway, NTR (which became part of Canadian National in the early 1920s, and this portion of the line was sold to Ontario Northland in the late 1980s). Today, in an ironic twist, CN owns the former ACR and is the tenant to the ONR in the former NTR yard at Hearst. 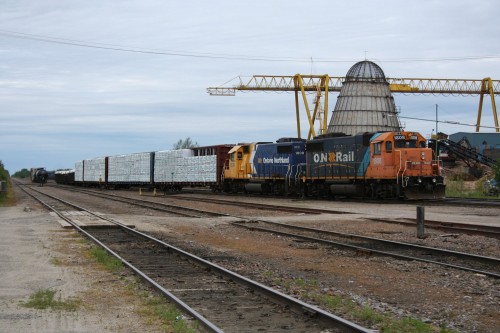 Ontario Northland train 516 prepares for departure at Hearst for Kapuskasing. The massive log crane and old sawdust burner at right are part of the Tembec lumber mill. July 2015.

Industry at Hearst today consists of a large Tembec sawmill (formerly Malette, formerly United Sawmills, formerly Fontaine Lumber) and a plywood mill operated by Columbia Forest Products (formerly J.D. Levesque). Also, a mill (Lecours Lumber) at Calstock, approximately 20 miles to the west, is served by a switch job out of Hearst yard. At least one other sawmill (Selin Lumber/Excel Forest Products – abandoned and torn down) also existed at Hearst.

Interesting to note: the original roundhouse at Hearst appears to still exist as part of the Tembec mill buildings.