Until about the late 1950s, Canyon siding was just another lonely wilderness siding, situated alongside the Agawa River in the remote gorge of the Agawa Canyon. Recognizing the scenic beauty of the Canyon and the tourist potential, the Algoma Central Railway established the privately owned Agawa Canyon Park and developed the location as a destination for a day trip tour out of Sault Ste. Marie on the “Agawa Canyon Tour Train” 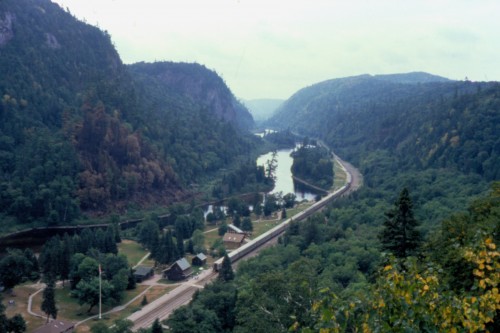 Some of the older coaches were upgraded with modified steps for easy de-training of passengers at the siding and service started out with regular train no. 1 dropping off a dining car and a coach or two in the siding to be picked up later by the southbound no. 2. This service grew in popularity throughout the 1960s with more and more cars being regularly set off in the siding at Canyon. By the early 1970s so many cars were being used in the Agawa Canyon Tour Train service that an extra train was run to exclusively handle the tour cars for Canyon. By the mid 1970s, it was permanently added as a regular daily train in the summer timetable. Also from 1969 to 1974 “new” passenger cars were acquired to expand and replace the existing fleet, with coaches, baggage cars and dining cars acquired secondhand from such roads as Canadian Pacific, Central of Georgia, Southern Pacific, Santa Fe, Illinois Central, Union Pacific, and Denver & Rio Grande Western.

Facilities were gradually upgraded over the years as well, with the old section house becoming the park ranger’s office and bunkhouse, scenic hiking trails established in the woods and along the river, upgraded washroom facilities, picnic tables and shelters, and a couple of lodges. One of the railway’s old heavyweight dining cars was moved to the park as a souvenir shop, although this is now currently empty. 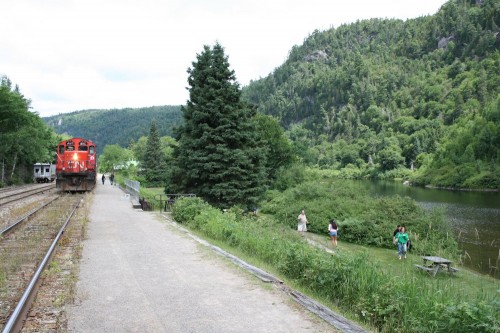 Though the equipment used and the ownership of the railway (from Algoma Central to Wisconsin Central to Canadian National) has changed a few times since the service began, the Agawa Canyon Tour Train continues to be a regular part of the summer operations on the railway.

During the 1980s through the early 2000s there was also a winter version of this train – known as the Snow Train – which would not actually stop at Canyon due to the often harsh weather and heavy snowfalls in the region, but run though the gorge to the next siding and turn at Eton, north of the canyon where the valley widens and flattens out. However this train has been discontinued for several years.