This Saturday I had the opportunity to attend the Toronto Railway Prototype Modelers (RPM) Meet. This is the first time I’ve made it out to this event, and it was an interesting time with a group of like-minded model railroaders.

The event is held at Humber College and consists of several clinic presentations in the morning, with a second room devoted to showing off models that the attendees are encouraged to bring along. 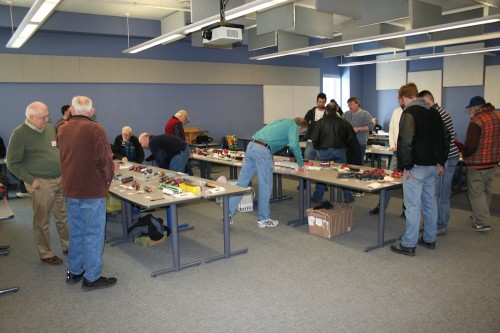 The model display room at the Toronto RPM meet.

I arrived on campus shortly after 8:30 am, and eventually managed to find the rooms where the event was being held. I signed in and slipped into the first clinic session, and would finish setting up the models I brought during the breaks between the sessions.

The morning consisted of 3 clinic presentations, each about 45 minutes in length or so, like small lectures on railroad topics, with 10-15 minute breaks in between each clinic. Sitting in a college classroom again to take in the presentation added to the feel of an academic presentation, but the clinics were interesting material. 😉

The first clinic was presented by Pierre Oliver focusing on the railroads and facilities in St. Thomas, Ontario, and the equipment and operations of the Wabash Railroad, which ran through on operating rights on the Canadian National’s track, and shared facilities in St. Thomas with other railways. He finished with a look at his model version of a portion of the Wabash in southern Ontario.

The second clinic, presented by John Spring, was a detailed look at the Toronto, Hamilton & Buffalo’s branch line to Port Maitland and showed various locations along the branch down to Port Maitland, and the changes and development at the port over the years. Both of these presentations used various railway maps and aerial and period photos from various sources to orient the viewer.

The third and last clinic, presented by Andy Mallette, was on modular railroading, with specific examples from experiences with the S Scale Workshop club, of which he is an active member. He talked about ways a modular club can be organized, why a modular club should have explicitly defined standards, different styles of construction, ideas of how groups should present themselves when on display and various mistakes and lessons learned.

After the clinics, we broke for a lunch break, and most of us found our way over to the campus Tim Horton’s for something to eat where I had lunch with Pierre and our mutual friend Hunter Hughson, who’s a member at the WRMRC with me. The meet is held on Humber’s campus every year, so fortunately a number of people knew exactly where to go. 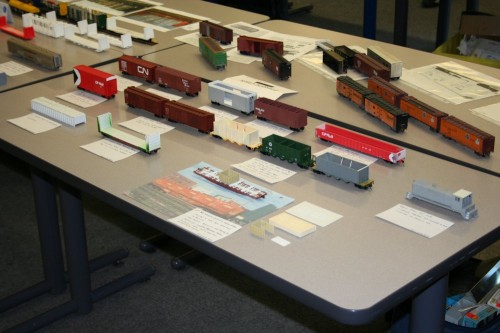 A few of my models on display at the RPM meet.

After lunch was the other main part of the RPM event: the model displays and the “bring and brag” portion. After everyone had a chance to have lunch, and browse the display models for a little while, the modellers were encouraged to go around the room and say a few words about the models and the techniques used to build them. These ranged from a few examples that were basically just factory models with minimal details to an exquisitely scratchbuilt CN C40-8CM locomotive, to a 4 foot long resin and styrene self-unloading lake freighter.

And can you imagine the odds that a second person there that day would also have a model of the same extended height CP Rail boxcar that I’ve been working on? There were actually *two* instances of two different people bringing models of the same rare prototype: two of us were working on models of that CP rebuilt boxcar, and two other modelers brought models of a unique “door and a half” Central of Georgia steel boxcar. Crazy coincidences. 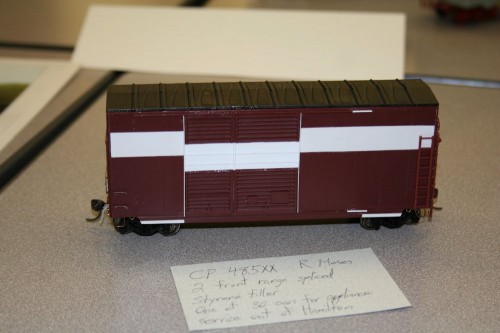 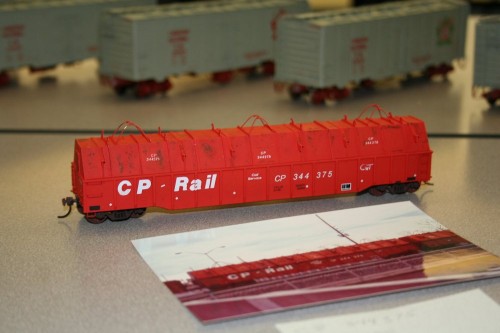 Scratchbuilt CP coil steel gondola. I’d like to do one or two of these myself. 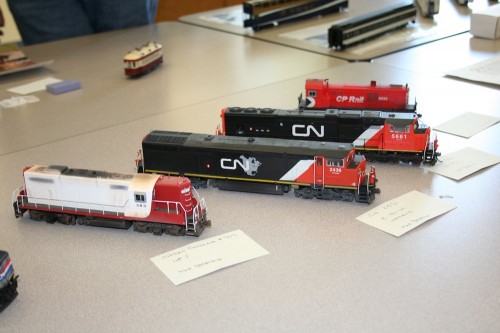 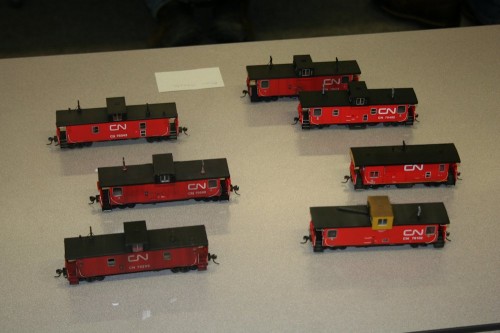 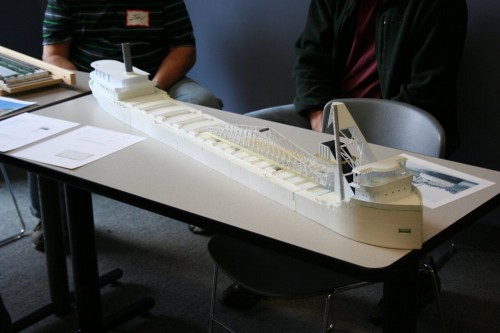 Self unloaded lake freighter, roughly based on a compressed version of the MV Stadacona. The hull is kitbashed from a Sylvan freighter kit with several extensions, and the self unloading equipment is entirely scratchbuilt.