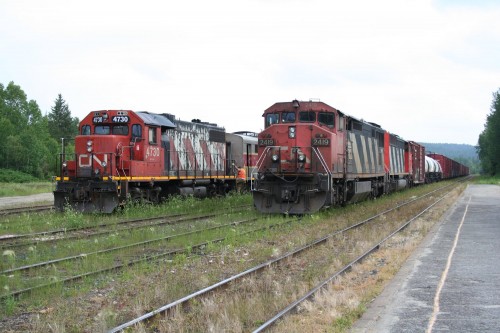 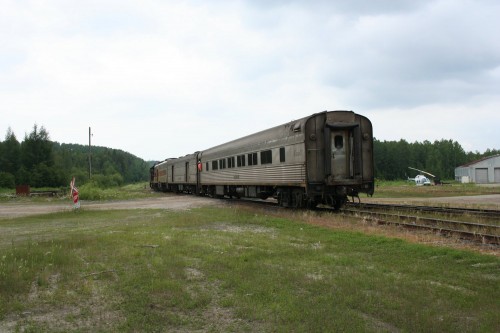 Over on the Trains magazine site, this interesting two-part travelogue has been posted under one of the editorial sections. The writer traveled from Sudbury to White River on VIA Rail’s RDC (self-propelled Budd Rail Diesel Cars) train service and then intending to ride from White River to Franz and catch the southbound ACR service to Sault Ste. Marie. Unfortunately this happened to be on the day that the passenger train got held up, and he wound up waiting at Franz for no train. Fortunately there was a CN employee that was able to give him a ride out to Hawk Junction in a hi-rail truck. Check out both links, it’s an interesting re-cap:

In the second link, he includes this paragraph, which clears up a few other details about the situation that caused the cancellation:

A half hour later (around 1:20 PM), I called again, and the agent made it clear, without divulging details, that she felt it highly unlikely that the ACR train would complete its run that day. I later discovered that a formal complaint was filed with Transport Canada around 10:30 that morning against the crew of the ACR train, alleging that a violation of operating rules had occurred the previous day (the ACR crew was later cleared of any wrongdoing). Once such a complaint is filed, neither crew involved can legally operate a train during a mandatory 48-hour investigation period. That day was only the day after a new operator, Railmark Canada Ltd., had formally taken over the passenger train’s operating contract (replacing CN crews with its own). Since Railmark had not been able to hire any additional crew, it had no way of operating the train until the investigation was complete.

That’s a bit clearer than just “unspecified infraction” that showed up in the media articles which didn’t really have any more information, and I think wraps that all up rather nicely.