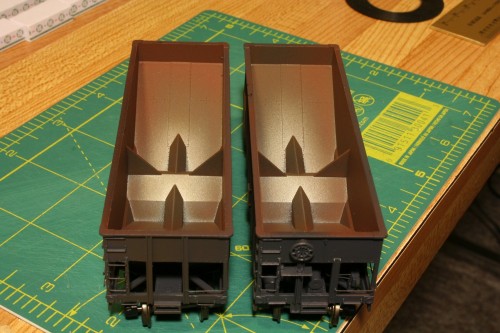 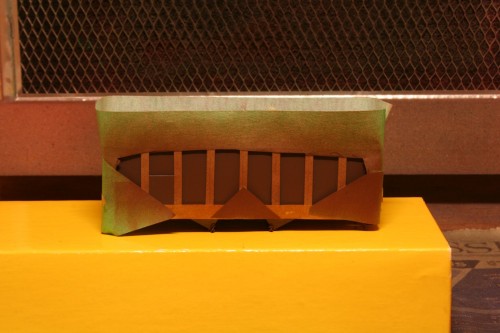 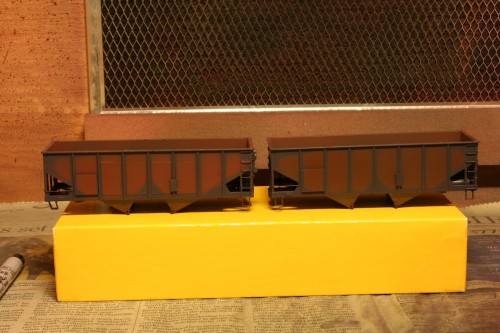 This is another pair of cars pulled out of a box on a shelf somewhere that I started years ago and then put aside at some point. This week I got them out again, cleaned them up and finished off the detailing on them.

These two cars represent the older hoppers on the Algoma Central’s roster. Information on these cars’ history is scarce, but sources suggest they were acquired secondhand from multiple sources in the United States. Studying the ACR roster over time, it appears that several sub-groups with at least 4 different listed cubic capacities were added beginning in 1938 (when the sinter plant at Wawa was built) with more added throughout the 1940s and 1950s. As these were all acquired secondhand, build dates ranged as early as before the Great War (a.k.a. WWI). It appears there may have been around 300-400 of these cars at some point.

By the 1970s, these old cars were in really rough shape with some derailments said to have resulted from one or more of the older cars essentially being pulled apart. From 1971 through 1975, 400 brand new, larger 100-ton cars were acquired from National Steel Car to replace the aging smaller cars and the old cars were scrapped. A 1984 freight car list republished in Dale Wilson’s “The Algoma Central Story” however shows 16 cars remaining within the number range 6605-7604, a range covering several original sub-groups in the 6600-6900, 7000-7100, 7500 and 7600 series. These cars would have been non-interchange, and very likely reserved for company service at this point. Official Railway Equipment Registers stop including any of these cars in public listing early in the 1970s. 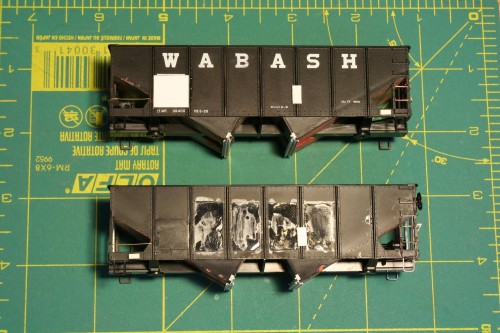 The main visual feature of the ACR’s 55 ton hoppers was the reporting marks and data being place on a sheet steel plate between the first two ribs on the left of the car side, rather than directly on the car body.

At one time, all the lettering may have been painted on the car side itself, but for many years there was a practice of loading these hoppers with sinter from the ore processing plant while still hot, which had the effect of burning off the paint, leading to some really interesting weathering patterns with most of the car sides being bare rust and the practical solution of putting the car data on a separate plate instead of the car side itself. The Kar-Trak ACI labels were also placed on a smaller plate mounted towards the right-hand end of the car side.

Both cars have the data plate and a smaller plate for the ACI label fashioned from styrene sheet and strip. On the lower car, I also used .005″ [clear, because that’s what I had on hand at the time] styrene sheet to represent repair panels welded on to the side of the car. The way the light caught them doesn’t show really nicely in the above photo, but shows a bit better below. 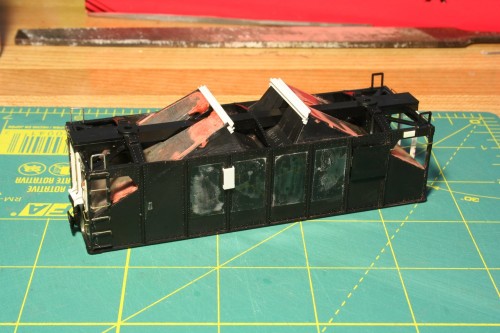 Underside improvements to the car involved using body putty to fill the gaps around the metal weights installed below the car’s slope sheet and new door bars and a representation of the locking mechanism scratchbuilt from various styrene strips to match what showed in the prototype photos.

Both cars got a little bit of upgrading on the ends as well. The model represents a car with vertical brake shaft, and I gave both cars a brake wheel housing. The car at left also got new vertical braces that extend over the full height of the car compared to the original uprights as on the car at right. This was following prototype photos, but I decided to leave the second car alone; after all, there was a certain amount of variety in this fleet.

I didn’t replace all of the body grab irons on these cars, but I did at least upgrade the ladders in the open ends with wire grabs to get rid of the look of deep, flat steps that often plagues models of hopper cars with one-piece bodies and cast ladders.

I also didn’t necessarily bother to add all the proper piping and brake linkages between the components under the ends. They may not be contest models, but they should look good on my [future] layout when rusted within and inch of their life and loaded with ballast in a work train.