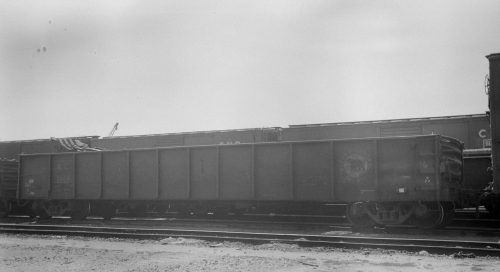 For this installment of Freight Car Friday we turn the clock way back to May 6, 1957 to look at one of the Algoma Central’s 48’6″ drop-end mill gondolas in its original 1947 as-delivered paint and lettering.

The lighting is a little dark and the image is of course in Black and White, so it doesn’t convey colour information, but this early spartan scheme (dressed up with the bear logo towards the right-hand end of the car side) features a black car body with white lettering – except the rings encircling the bear logo are in red. This paint scheme was typical of all AC steel gondolas from the late 1940s and was also applied to the home-built 39′ and 40′ gondolas in the 4601-4804 series.

While the billboard lettering with the ALGOMA CENTRAL name spelled out across the car side in 24″ tall letters and the bear herald in the centre is more familiar to most fans and modelers, and was applied to these cars n later years, the original delivery of these cars predates the first use of that lettering in 1958 on the new 52’6″ cars. (Also note that the familiar image of the billboard lettering is of a black car with white lettering, the original late 1950s version of this scheme had the car body painted brown. This only lasted a few years, and early 1960s repaints were in black.) 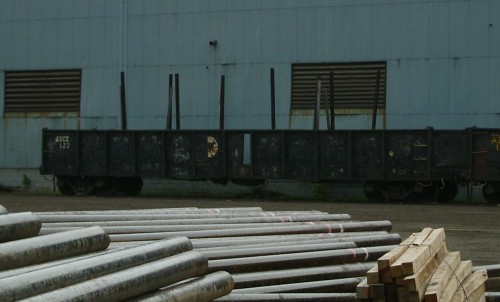 These three old 48′ gondolas photographed in behind the Algoma Steel tube mill at Sault Ste. Marie/Steelton in August 2004 are former Algoma Central cars originally built in 1947 by National Steel Car in series AC 3501-3850. Most of their original lettering has been obliterated but traces of the bear logo is peeking through on all three cars. The 128 below appears to a late 1950s brown repaint. 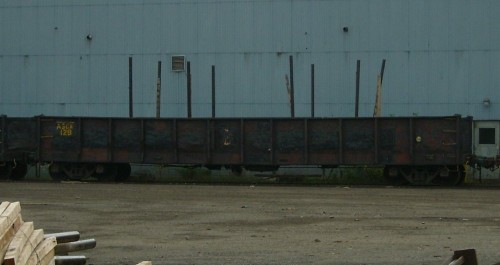